ANN’S MUSINGS – My secret life as a …

professional urban planner was short-lived but left an indelible mark on me.

From my late teens, I wanted to be an architect but was roundly discouraged during my initial drawing class as an undergraduate. Not because I could not draw, but because, I was told, there would be no future for me as a female.

Hiss. Boo. But in fact, I was more interested in what happens in the space between buildings than within them, so I went on to study city planning. I have never stopped caring about what makes cities active and vibrant. It all started when I was five or six, living in a Philadelphia suburb. I would often accompany my father into the city to collect my grandfather and bring him out to our house for Sunday dinner. 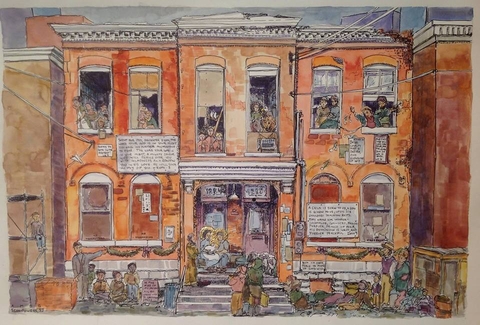 I could just feel that there was something special and enviable about the street life I saw outside my grandfather’s low-rise apartment building in working class West Philadelphia, something that was absent from our pleasant and shady street with its stone houses and big yards. Entire families were on the sidewalk. There were older kids playing hopscotch or marbles and little ones rocked by their mothers, who sat on front stoops chatting or peeling potatoes. Men in undershirts gathered in clusters, drinking bottled beer and half listening to the ball game on the radio. From then on, I knew the quality of public life had more to do with what went on in the streets than with the property values of the homes along them.

My long interest in the life of cities is the reason why I am extra eager about our upcoming trip to Colombia. Many of the ideas that fueled my passion in planning school had to do with means of physically connecting people in meaningful and satisfying ways. It has too often seemed that in my part of the world, the economics of big development have determined what does and doesn’t get built in cities. And many decisions tend to keep people isolated from one another.

Lessons in urban renewal in Colombia were nowhere on the radar when we planned this trip. The drawing cards were great literature, stunning natural landscapes, the country’s reputation as a foodie destination, the postcard charm of the colonial streets of Cartagena, and, after a singularly brutal winter last year, a welcome dose of warm and sunny weather. But I was hesitant about the cities of Bogotá and Medellín. My image of both was largely negative, in all the ways you can imagine.

Imagine my surprise when I discovered that these cities have changed dramatically and have gained an international reputation for their pioneering policies in urban living, with the emphasis placed on children, the poor, physical fitness, transit, education, and environmental sustainability. The result is happier people.

Much has been written about urban transformation in both Bogotá and Medellín. Headlines like
• Bogota’s New Spirit: Bottom-Up Urban Planning and A City’s Rebirth
• Bogota’s urban happiness movement
• Happy Cities for the Global South: Interview with Enrique Peñalosa
• Former Bogotá mayor Enrique Peñalosa is convincing city planners from Beijing to Mexico City to create lively public spaces that center around people and community, not cars.
• Latin America’s New Superstar: How Gritty, Crime-Ridden Medellín Became a Model for 21st-Century Urbanism
• Medellin’s renaissance: What the Colombian city can teach us about urban renewal
• Medellin, Colombia: Why inclusivity and innovation are sparking urban renewal

Feel free to read, but first, take a look:

Ciclovía, literally “bike path” in Spanish, is a ground-breaking weekly event that started in Bogotá, Colombia, that draws more than 1.5 million people to walk, bike, skate and enjoy more than 70 miles of streets opened to people—and closed to automobile traffic. Founded in 1976, Ciclovía started small and grew, and non-cycling programming was added. Now Ciclovía covers 70 percent of 20 different neighborhoods, with four loops through the city, enticing people to walk, skate, or cycle to other neighborhoods, visit friends, and take their children to different parks to play.

MEDELLIN NAMED MOST INNOVATIVE CITY IN THE WORLD
The significance of Medellín’s transformation cannot be overstated. Through bold moves in architecture, planning, and urban design, it has gone from lost cause to becoming, in 2012, “Innovative City of the Year” as declared by a joint Citi/Urban Land Institute/Wall Street Journal contest. Suddenly, Medellín has become a best-practices case study for mayors and policymakers worldwide. 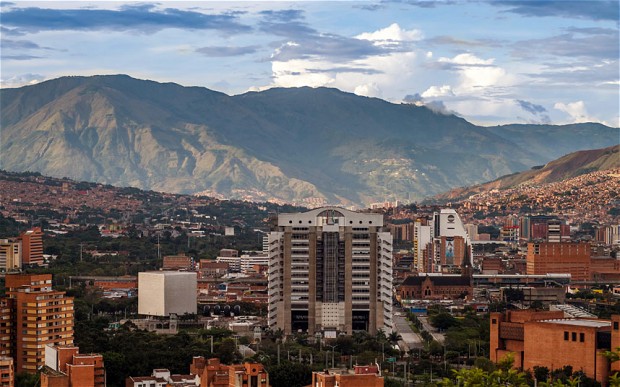 Bogotá and Medellín have become international case studies for urban quality life, healthy populations, equity, and sustainability. How did this happen? What steps were taken to upgrade the city’s public spaces and facilities? How was a culture of transformation created in cities once notorious for violent crime? No doubt, for all the investment and best intentions, the cities will fall short of their promises. Still, I cannot wait to see and learn firsthand about their remarkable accomplishments.

“In Bogotá, our goal was to make a city for all the children. The measure of a good city is one where a child on a tricycle or bicycle can safely go anywhere. If a city is good for children, it will be good for everybody else.”
“We need to physically connect people with one other—to get people to mix and get to know what’s over there,”
– Enrique Peñalosa, Former Mayor of Bogotá

“Our most beautiful buildings must be in our poorest areas.”
“It’s amazing what you can do when you don’t keep all the money for yourself and your friends,”
– Sergio Fajardo, Former Mayor of Medellín

COLOMBIA: A Paradise Where Reality and Magic Blur

Of Love and Other Demons, by Gabriel García Márquez
The Armies, by Evelio Rosero, trans. Anne McLean
The Angel of Galileia, by Laura Restrepo, trans. Dolores Koch