Can’t we all get along, here, there and everywhere?

Many remember Rodney King’s famous question “Can’t we all get along?” after his ruthless beating by Los Angeles police officers was caught on tape and sparked devastating citywide race riots in the early 1990s. Rodney King’s question remains unanswered. Evidence that we are getting better at gettting along is pierced with news stories from around the world that we are as fiercely and violently divided as ever.

However, here is a thoughtful letter of cautious hope from an American in Eygyt. Cathryn Goddard has lived and worked as an international development consultant in Cairo for many years.  Our fall  trip to Egypt, Rocking the Cradle of Civilization, was richly enhanced by Cathryn’s presence among us, her cross-cultural insights, and her introduction to us of Egyptian university students. Here is her New Year greeting.

Read it and offer your own thoughts on Cathryn’s analysis, whether you belive we are getting along better now, and how we might do it better.

Normally this note would be an update about last year, but many of you have asked me to comment on the situation here in Egypt.  The highlights about me for 2010, are that I am back to writing, traveled less, exercised more and was able to make new friends and reconnect with some I hadn’t seen in quite a while (more years that I care to mention!).

A special bond is formed when you reside in a country over some interval, and all the more so when its people share their language with you, putting up with your stumbling beginnings, as well as ongoing mistakes in accent, grammar and usage.   Because initially you can’t even talk understandably to express yourself, let alone follow a conversation (intelligent discussion comes much later), the situation requires a certain indulgence not unlike a parent with a child.  Egypt, has welcomed, indeed nurtured, me for about fifteen years.  My Egyptian friends, surprised by how much I travel, enjoy reminding me that, according to local tradition, those who drink from the waters of the Nile, will always return.

Egypt had a rocky beginning to the new year when a bomb went off in Alexandria at midnight outside a church, just when parishioners were leaving services (if you managed to missed the story, see “Egptian Coptic Christians Mark Christmas.”

This incident has been a rude awakening for the country, reminding people that the bonds that link individuals and groups and communities into society, are a lot like plants:  they need sunshine, they need water, they need tending.  Cordiality, like friendship, cannot be taken for granted.

In the initial shock, the people I come into contact with, (a majority of whom are Muslim as 85-90% of Egyptians are Muslim), including a surprising mixture of intellectuals and those who cannot read, were reeling in the shock of the news.  They were stunned, embarrassed also, that something like this could happen here.  (Be very sure, by the way, that some intellectuals are more narrow minded than those who can’t read, and vice versa).  Along with the indignation and anger, I observed a national sadness, a nostalgia for days when such an act seemed inconceivable.

This country has resisted, yielded to and assimilated invaders, and there have been minority communities and expatriates living and working here, throughout its long recorded history.  Society is not a strictly harmonious institution anywhere, but a land that is flooded annually learns quickly to put a high premium on cooperation.

Although this is not a country that moves readily to public demonstrations, the electronic reaction was swift on Facebook, where suddenly the image of a unified crescent and cross (used in the 1919 nationalist movement against the British), popped up in the place of pictures of both Muslim and Christian Egyptians.

Now even businesses are showing this symbol, with the note in Arabic, “We are all Egyptians,.. we are all against terrorism.” 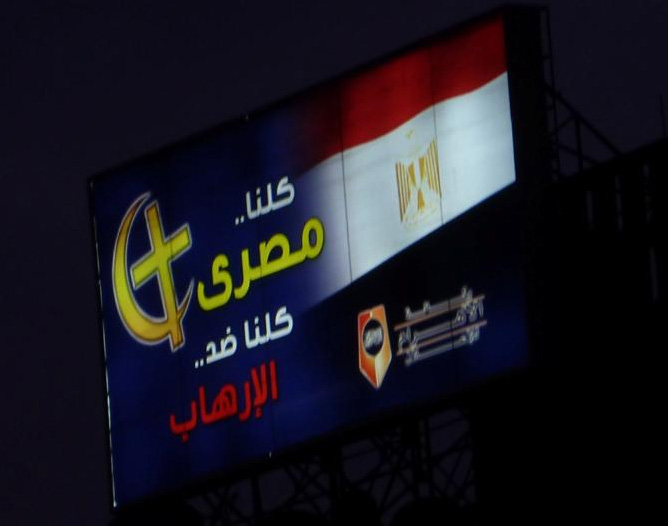 These symbolic acts may not fix the problem, but they are a step in the right direction by people who realize the vineyard of friendship across diverse communities needs to be tended. See “The Arab World Must Face its Demons.”

I am, by the way, also a former resident of Arizona, where this week a 22-year old gunman with an automatic weapon shot a congresswoman in the head, and killed six other people including a federal judge and a nine-year old girl, reminding us we each have demons to face.

My wish for this New Year 2011 is not just for Egyptians, but for all of us around the world, that we try to do something to strengthen the fabric of our societies, respecting and protecting our diversity, the ones who look different, the ones who talk or dress differently, those who are joined by other religious or cultural traditions, or even those who disagree with us politically.  We all have plenty of lessons to learn here  Let the best examples guide us, and let us not be smug in believing we are free from these and similar problems. All it takes is benign neglect of mutual respect and fairness, for fear and hatred to run rampant.

A chorus of angels singing “Peace on earth, good will to all people,” is no guarantee.  It takes our individual, sustained efforts.  Even small steps can make a big difference, however, if we choose to open our hearts and minds to others.