[Editor’s note: We warmly welcome back Sean Forester, a longtime seminar leader, to Toronto Pursuits. Sean will serve up a delicious blend of literature, art, and film in his seminar on one of the most important playwrights and short story writers in world literature.]

It will come as no surprise that Chekhov has been on my mind a lot lately, including while having dinner at a farm-to-table restaurant near my home in Sonoma, California. It struck me that to read Chekhov is to experience a freshness and complexity, like a meal where diverse ingredients retain their individual flavours but come together to form something greater than the sum of each dish. I invite you to join me in Toronto this summer to savour Chekhov’s skillful attention to detail, memorable characters, and exquisite blend of tragedy and comedy. Until then, to whet your appetite, here’s Chekhov three ways.

Chekhov was from a peasant background. His grandfather was a serf; his father was devoutly religious and physically abusive. Chekhov first trained to be a physician, and to support his medical studies he began writing short stories and comic sketches for newspapers. And he continued to practice medicine even as he wrote plays and short fiction. As a doctor Chekhov witness a great deal of suffering and death, but also illness of the mind and of society—ignorance, prejudice, corruption, cruelty.

Chekhov hated the injustices he saw on a daily basis, and his works explore some of the ways Russian society might be transformed. For example, he shows the failures of the old order of land owners in The Cherry Orchard. And, far ahead of his time, he points to environmental destruction in Uncle Vanya. However, Chekhov’s writing is not didactic; he believed, “The role of the artist is to ask questions, not answer them” and that “man will become better when you show him what he is like.” And Chekhov is able to poke fun at himself and his profession: “Doctors are the same as lawyers, the sole difference being that lawyers only rob you, but doctors rob you and kill you too…”

Chekhov’s study of science and practice of medicine helped him to become an observant and compassionate writer. In a New Yorker article, Siddhartha Mukherjee, himself a physician/writer, describes Chekhov’s visit the notorious prison colony on Sakhalin Island, and what that taught him.

Chekhov’s great dramas such as the Uncle Vanya and the Cherry Orchard were premier at the Moscow Arts Theater and directed by Konstantin Stanislavski. The naturalism in Chekhov’s writing helped Stanislavski to develop a new naturalism in acting technique, his celebrated system of Method acting. Method acting was taken up by teachers in New York such as Lee Strasberg and Stella Adler, who in turn taught many of the greatest actors in film. In our seminar this summer we will watch and discuss some short film clips of Chekhov’s plays. Stanislavski emphasized the tragic elements of Chekhov’s work, while the author himself felt that the comedy should be in the foreground, calling Uncle Vanya “A Comedy in Four Acts.” To me, this shows the complexity of Chekhov, how the same characters and events can be view as both tragic and comic.

In Chekhov’s short story “Three Years,” the protagonist Yulia visits an art exhibition. Chekhov describes how she “stopped before a small landscape… In the foreground was a stream, over it a little wooden bridge . . . .  Yulia imagined walking herself along the little bridge, and then along the little path further and further, while all round was stillness . . . . And for some reason she suddenly began to feel that she had seen those very clouds that stretched across the red part of the sky . . . . She felt lonely, and longed to walk on and on along the path; and there, in the glow of sunset was the calm reflection of something unearthly, eternal.” The effect of the painting very much captures an essential quality of Chekhov’s own art. 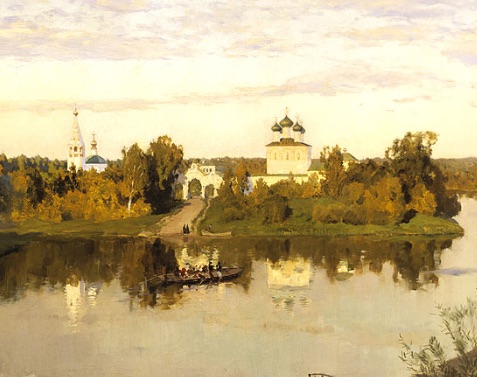 The parallels between Chekhov and his friend the Russian impressionist painter Isaac Levitan were clearly understood and appreciated at the time. Tolstoy wrote, “The illusion of truth in Chekhov is complete . . . . like an impressionist artist he achieves wonderful results with the strokes of his brush.” This summer I will  offer a couple of slideshows of Russian art as part of the seminar, and we will discuss paintings by Isaac Levitan, Iliya Repin, Ivan Kromskoi, and others.

Chekhov aims for psychological realism with a distinct mood and atmosphere. For this reason, many practitioners of the arts—writers, painters, actors, and directors—love Chekhov. One such devotee is George Saunders, whom many consider one of the best writers living today. I leave you with an interview in the Atlantic in which Saunders discusses Chekhov’s particular genius.

Please join me for Like Light on Broken Glass: Stories and Plays of Anton Chekhov and experience for yourself a hearty meal of Chekhov.