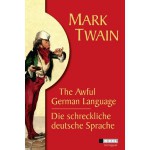 If you’ve ever studied German (and maybe even if you haven’t), you’re likely to find this short essay to be hilarious. Published as Appendix D from Twain’s 1880 book A Tramp Abroad, this comedic gem outlines the pitfalls one will encounter when trying to wrap one’s mind around the torturous German cases, adjective endings, noun genders, and verb placement.

Twain made his first unsuccessful attempt to learn German in 1850 at age fifteen. He resumed his study 28 years later in preparation for a trip to Europe. While in Germany his language skill actually progressed to the point where a friend suggested, “Speak in German, Mark. Some of these people may understand English.” During this 1878 stay in Germany, Twain had a dream in which, according to his notebook, “all bad foreigners went to German Heaven—couldn’t talk and wished they had gone to the other place.”

If you have ever been frustrated in your effort to learn a second language, any language, you will feel somewhat vindicated by reading Mark Twain’s  The Awful German Language.

No German required for our Made in Germany trip, June 11-25, 2011, where we will explore tales of three cities: Dresden, Weimar and Berlin.