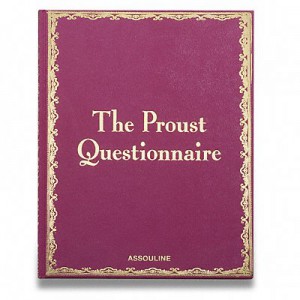 Am I the last literate person alive to discover The Proust Questionnaire? Having stumbled on a reference today, I see it is (and has been) everywhere for a long time. If you, too, have had your head buried in a different book, here is a little background, abbreviated from Wikipedia.

The Proust Questionnaire is a questionnaire about one’s personality. Its name and modern popularity as a form of interview is owed to the responses given by the French writer Marcel Proust.

At the end of the nineteenth century, when Proust was still in his teens, he answered a questionnaire in an English-language confession album belonging to his friend Antoinette, daughter of future French President Félix Faure, entitled “An Album to Record Thoughts, Feelings, etc.” At that time, it was popular among English families to answer such a list of questions that revealed the tastes and aspirations of the taker.

Proust answered always with enthusiasm. The original manuscript of his answers of 1890, at the time of his volunteer internship or some little time afterwards, titled “by Marcel Proust himself,” was found in 1924. It was auctioned on May 27, 2003 for the sum of €102,000.

A similar questionnaire is regularly seen on the back page of Vanity Fair magazine, answered by various celebrities. In October 2009, Vanity Fair launched an interactive version of the questionnaire, that compares your answers to various luminaries.

And now you can complete the questionnaire yourself. The Proust Questionnaire Archive offers you the opportunity to answer the same questions Proust answered and to make your answers known to the world (they will be posted on The Proust Questionnaire Archive website) and, just like Marcel Proust’s answers, to preserve them for posterity (your answers will be archived at the Internet Archive and a copy will be kept at the New Library of Alexandria in Egypt.

I image you can wile away many hours contemplating the meaning of your answered and checking others. Guess I was puzzling over the MBTI and the Enneagram when more elevated folks were figuring themselves out by way of Proust.