CLASSICAL TRIVIA! Will the real May Day please stand up?

We shall grow old apace, and die
Before we know our liberty.
Our life is short; and our dayes run
As fast away as do’s the Sunne:
And as a vapour, or a drop of raine
Once lost, can ne’r be found againe:

So when or you or I are made
A fable, song, or fleeting shade;
All love, all liking, all delight
Lies drown’d with us in endlesse night.
Then while time serves, and we are but decaying;
Come, my Corinna, come, let’s goe a-Maying.

Although May 1 pretty much comes and goes with little notice in Canada and the U.S., the day, often called May Day, is a national holiday in more than 80 countries. But you might be confused about what is being celebrated, spring or organized labour?  Both, it turns out, and they only coincidentally fall on the same day. May 1 is a traditional spring holiday in many Northern Hemisphere cultures with ancient neo-pagan origins. International Workers’ Day commemorates an event in Chicago in 1886.

Here, with the help of Wikipedia, is a brief look at May Day history.

Beltane was a Celtic calendar feast ushering in the start of summer.

Bonfires, often created by rubbing sticks together, were common features of Beltane celebrations. Related rituals included driving cattle between two fires, dancing around the fires, and burning witches in effigy. Another tradition was Beltane cakes, which would be broken into several pieces, one of which was blackened. They would be drawn by celebrants at random; the person getting the unlucky blackened piece would face a mock execution.

In recent years, Beltane has been adopted or revived by neopagan groups as a major seasonal festival.

St. Walburga (or Walpurgis), the abbess of the monastery of Heidenheim, helped St. Boniface bring Christianity to 8th-century Germany. She died February 25, 779. As her remains have been moved on multiple occasions, several days have been designated in her honor, one of which is the first of May.

This date coincided with an already existing pagan festival, which, in Germany, included rites to protect one against witchcraft. This led to a hybrid legend developing, in which witches were said to meet with the Devil on the eve of May 1, on the Brocken peak. The night of April 30 became known as “Walpurgisnacht,” and the annual meeting was dramatized by Goethe in Faust.

Some cultures, such as those found in India and Egypt, had spring fertility festivals. The Roman festival celebrating Flora, goddess of fertility, flowers, and spring, was celebrated from April 28 through May 3.

Bringing in the May

In medieval England, people would celebrate the start of spring by going out to the country or woods—”going a-maying”—and gathering greenery and flowers, or “bringing in the may.” This was described in “The Court of Love” (often attributed to Chaucer, but not actually written by him) in 1561:

And furth goth all the Court, both most and lest,
To feche the floures fressh, and braunche and blome;
And namly, hawthorn brought both page and grome.
With fressh garlandes, partie blewe and whyte,
And thaim rejoysen in their greet delyt.

Another English tradition is the maypole. Some towns had permanent maypoles that would stay up all year; others put up a new one each May. In any event, the pole would be hung with greenery and ribbons, brightly painted, and otherwise decorated, and served as a central point for the festivities. In the 19th century, people began to braid the maypole with ribbons by weaving in and out in the course of a dance. Other later traditions include making garlands for children and the crowning of the May Queen. Maypole dance from 1929.

May Day was also a time for morris dancing and other dances.

Fading in popularity since the late 20th century is the giving of “May baskets,” small baskets of sweets and/or flowers, usually left anonymously on neighbors’ doorsteps.

In the Roman Catholic tradition, May is observed as Mary’s month, and May Day is usually a celebration of the Virgin Mary. Mary’s head will often be adorned with flowers in a May crowning.

In many countries, May Day is also Labour Day. May Day, as a workers’ holiday, was born from the struggle for the eight-hour day.  During the 1880s in the United States, labour unions organized a number of strikes aimed at implementing an eight-hour day by May 1, 1886. This led most notably to the Chicago Haymarket Massacre on May 4 of that year.

Labour leaders, socialists, and anarchists around the world took the American strikes and their fallout as a rallying point, choosing May Day as a day for demonstrations, parades, and speeches. It was a major state holiday in the Soviet Union and other communist countries. 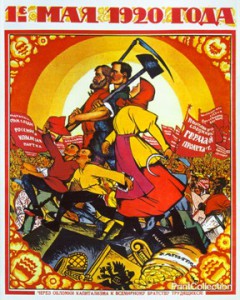 It became an important official holiday of the Soviet Union. May Day was celebrated illegally in Russia until the February Revolution enabled the first legal celebration in 1917. In 1918, May 1 was declared the Day of the International Solidarity of Workers, celebrated with elaborate parades and obligatory workers’ marches in Soviet cities. In 1992, after the collapse of the Soviet Union, the Russian Parliament renamed the holiday as Spring and Labour Day.

May Day is still celebrated as a workers’ holiday, with protests and rallies, in Europe and in countries with a significant Socialist or Marxist tradition in parts of Africa, East Asia, and Latin America. In recent years, these events have often been targeted against globalization.

So why does the official holiday for workers in the United States and Canada fall in September instead of May 1?

This is murky territory with various stories. Canadians have been observing the day in September since the 1889s, when a parade was held in support of the Toronto Typographical Union, who were on strike for a 58-hour week. In 1894, Canadian Prime Minister John Thompson and his government made Labour Day (Fête du Travail), to be held in September, an official holiday. In the United States, it is said that U.S. President Grover Cleveland feared that marking Labor Day on May 1 could become an opportunity to commemorate the  1886 Haymarket Massacre—the inspiration for May Day by the labour movement in the rest of the world.

However, the political left and social justice movements in Canada and the United States still celebrate the first of May.

What does all this have to do with Mayday calls? Niente. Nada. Mayday is an emergency procedure word used internationally as a distress signal in voice procedure radio communications. The call is always given three times in a row (“Mayday Mayday Mayday”) to prevent mistaking it for some similar-sounding phrase under noisy conditions, and to distinguish an actual Mayday call from a message about a Mayday call. It may derive from the French expression “venez m’aider,” meaning “come help me,” the last two syllables of which sound similar to “Mayday.” Alternatively, it may have been coined randomly, making the similarity to “m’aidez” coincidental.

MAY DAY IN PICTURES