Jo-Ann Minden and I are watching German films as part of our preparation for our Made in Germany trip this June. 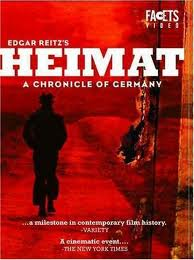 By far, the best has been Heimat,  a long trilogy of episodic films by Edgar Reitz which views life in Germany between 1919 and 2000 through the eyes of a family from the Hunsrück area of the Rhineland. Personal and domestic life is set against glimpses of wider social and political events.

The title Heimat is a German word meaning homeland. Its use is partly an ironic reference to the film genre known as Heimatfilm which was popular in Germany in the 1950s. Heimatfilms were noted for their rural settings, sentimental tone and simplistic morality.

Aesthetically, all three films are notable for their artful switching between colour and black-and-white film to convey different emotional states. Watch trailer.

We have also watched… 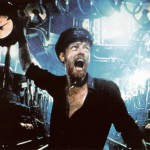 Das Boot is a 1981 German epic war film written and directed by Wolfgang Petersen, produced by Günter Rohrbach, and starring Jürgen Prochnow, Herbert Grönemeyer and Klaus Wennemann. It is an adaption of the 1973 German novel Das Boot by Lothar-Günther Buchheim. Set during World War II, the film is  is the true story of German U-Boat crew.It examines how these submariners maintained their professionalism as soldiers, attempted to accomplish impossible missions, while all the time attempting to understand and obey the ideology of the government under which they served.

Run Lola Run is a 1998 German crime thriller film written and directed by Tom Tykwer. The story follows a woman who needs to obtain 100,000 German marks in 20 minutes to save her boyfriend’s life.

Goodbye Lenin is a 2003 German tragicomedy film. In 1990, to protect his fragile mother from a fatal shock after a long coma; a young man must keep her from learning that her beloved nation of East Germany as she knew it has disappeared.

Stay tuned. We will report on future screenings. Let us know about your own favourite German movies.

I am adding to this, now that Jo-Ann and I have watched several more German movies.

The White Ribbon Directed by Michael Haneke (2009), in a stunning display of cinema as art and an entertaining, well-crafted story, Haneke confronts a key moral question of our time, the source of fascism in Germany. Although not providing any difinitive answers, the film suggests that some of the seeds may be found within the patriarchal feudal society of traditional village life.  Watch trailer.

Wings of Desire There are angels over the streets of Berlin, but these are like no angels you’ve ever seen. Bundled in dark overcoats, they watch over the city with ears open to the heartbeat of the human soul, listening to the internal musings and yearnings of earthbound humans like existential detectives. Wim Wenders’s (1988) most purely romantic film is like poetry on celluloid, a celebration of the transient and fragile moments of being human: the warmth of a cup of coffee on a cold day, the embrace of a friend, the touch of a lover, the rapture of love. Highly acclaimed, but Jo-Ann and I found it hard to get into. Watch trailer.

chitecture of Doom An examination of the Nazi aesthetic; filmmaker Peter Cohen reasons that National Socialism embraced the concept of war as a way to cleanse the world, and thereby make it beautiful. (1991) Watch trailer.

And these are on deck:

Rosenstrasse The principal focus of is film directed by Margarethe von Trotta (2003)  is what happened to those who were in a mixed marriage (“Aryan”/Jewish). Amid constant flashbacks, the film pieces together the story of the Rosenstrasse protest, where the women waited for seven days and nights outside of a Nazi jail for their Jewish husbands. The protests took place in Berlin during the winter of 1943. Watch trailer.

Nasty Girl Michael Verhoeven’s film (1989) is about an adolescent girl, Sonja, who researches the history of her hometown’s involvement in the Holocaust. Town elders don’t want to hear her essay on “My Hometown in the Third Reich.” (no trailer available) 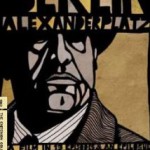 Berlin Alexanderplatz Rainer Werner Fassbinder’s wildly controversial fifteen-hour-plus Berlin Alexanderplatz, based on Alfred Döblin’s great modernist novel, was his crowning achievement. A film about a simple man who just wanted a simple life.  But both Weimar Germany and his own character threaten to stifle his efforts to change as he begins to slowly go mad. Fifteen monumental hours of love, betrayal suspence, murder. Digitally remastered in 2007  Watch trailer.

Jo-Ann and I welcome your comments and further suggestions.