The Japanese prints, so the story goes, had first arrived in Paris in the 1850s as packaging protecting ceramics. The prints attracted the attention of Claude Monet, who hung works from his large collection on his dining room walls at his home in Giverny.

Monet was not alone in seeking inspiration from Japan and the Japanese aesthetic. Edouard Manet, Edgar Degas, Mary Cassatt, and Helen Hyde, to name a few more, all studied Japanese prints and paintings. Some artists even spent long periods in Japan learning from masters there. An interest in all things Japanese, which the French called japonisme, extended to society as a whole. When Japan opened trade with the West in the middle of the 19th century, people were naturally curious about the archipelago. Helen Burnham, the curator of Looking East: How Japan Inspired Monet, Van Gogh, and Other Western Artists argues that japonisme was more than a passing fad or a special interest of a few artists. Rather, it was “a vague sensibility and a potent influence, a private tendency and a public mania, a subtle catalyst and a sweeping force central to the story of Western art in the modern era.” Understanding how the Japanese aesthetic was interpreted by the West, and vice versa, deepens our understanding of own artistic traditions and innovations.

I was happy to have the chance to visit Looking East when it made its way to San Francisco because the exhibition focuses on one of the major themes of Everyday Beauty: Art and Culture in Tokyo and Kyoto, the Travel Pursuit I will lead November 4–14, 2016. Most 19th-century admirers of Japanese art had to be content with learning about it from afar; we will see great works, from prints and paintings to temples, gardens, textiles, and sculpture, up close. As a group we will seek to understand Japanese art to appreciate it on its on terms but also to enrich our conception of visual culture.

What did artists such as Monet and van Gogh see when they looked at Japanese prints and paintings? Compression of objects close to the picture plane, flat colour fields, and diagonal compositions were all elements of the Japanese aesthetic had a powerful influence. For example, here is van Gogh’s copy (on the left) of a Hiroshige print that shows objects compressed close to the picture plane. It’s as if the artist is sitting on a branch of the tree! 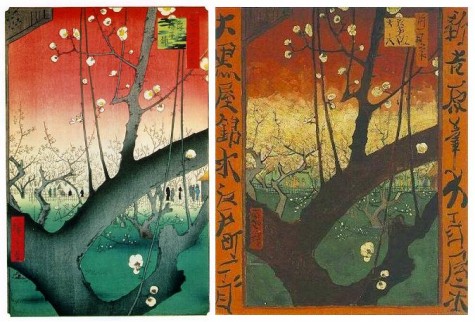 And here is Van Gogh’s painting of almond blossoms—it’s a beautiful picture that is both original yet influenced by his copy of a Japanese print: 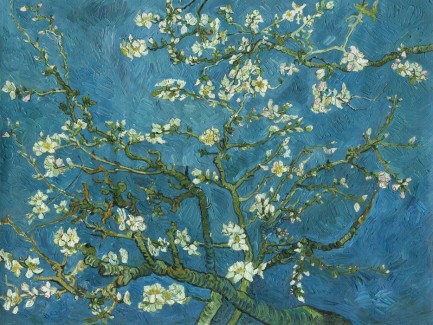 Mary Cassatt is a renowned Impressionist painter. Originally from Pennsylvania, Cassatt resolved to become a professional artist despite her family’s objections. She studied first at the Pennsylvania Academy of Art, and then in 1866 moved to Paris. Since women could not yet attend the École des Beaux-Arts, Cassatt applied to study privately with Jean-Léon Gérôme. She admired Degas and also studied informally with him and exhibited with the Impressionists.

Cassatt was inspired by a large exhibit of Japanese prints held in Paris in 1890 and wrote to her friend and fellow artist Berthe Morisot: “You who want to make color prints wouldn’t dream of anything more beautiful…. You must see the Japanese—come as soon as you can.” Cassatt was attracted by the patterns, flat color fields, and depictions of daily life, including women bathing and dressing and taking care of their children. She incorporated these into her prints. Cassatt also innovated in her printing techniques. Her color prints are actually not woodcuts but a combination of aquatint and drypoint (two types of intaglio printmaking techniques where images are incised into a surface): 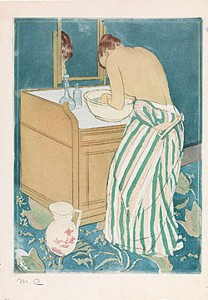 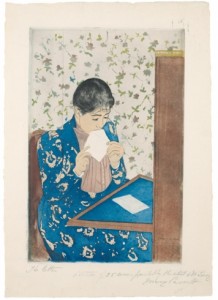 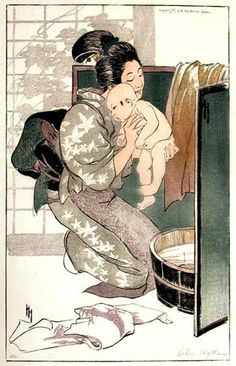 Helen Hyde grew up in San Francisco where she attended the California School of Design and studied drawing with Arthur Matthews. Hyde moved to Europe and continued her artistic education in Paris with Félix Régamey, who introduced her to his impressive collection of Japanese art.

Hyde was inspired by Mary Cassatt’s Japanese-influenced art. Like Cassatt, she often featured mothers and children or women in domestic settings. In 1899, Hyde travelled Japan to study woodblock printing. There she learned the Japanese printing techniques from Emil Orlik, a European artist living in Japan. Hyde lived in Japan from 1903 through 1913 and continued to refine her prints, which she exhibited around the United States. Helen Hyde is a beautiful draftsman—her skillful drawing combines a European academic accuracy with a Japanese style to create a unique sensibility.

Bertha Lum (née Bull) was born in Iowa and studied at the Art Institute of Chicago, where she was introduced to the teachings of Arthur Wesley Dow, who championed Japanese techniques. She married Burt Lum, a lawyer from Minneapolis, and in 1903 they honeymooned in Japan. She returned to Japan to learn printmaking techniques in 1907. Here is an example of her work: 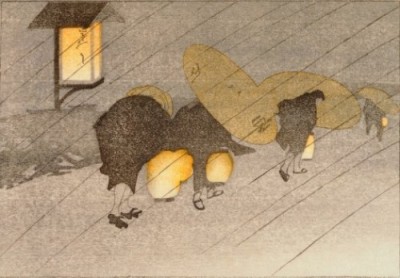 The Travel Pursuit Everyday Beauty: Art and Culture in Tokyo and Kyoto is a unique opportunity to immerse yourself in the beauty of Japanese art and culture and actually try to practice the arts yourself. We will include lessons in printmaking, tea ceremony, and ceramics. I am sure each of you who goes on the journey will, like van Gogh, find that the beauty of Japanese art and culture speaks to you. I’ll be writing more blog posts about the other types of art we will study, so watch this space!

I’ll look forward to seeing you in November,