GUEST BLOG—The Meaning of (My) Life: Shadows on Augustine’s Cave with David Schmitt

The path towards sainthood was an indirect one for our hero, Augustine. He ended up spiritually rather far from where he began, but just where his mother wanted him: “Never mind being a doctor or lawyer, my son is a saint!” And he got there by always looking for meaning below the surface. Plato would have loved this guy! 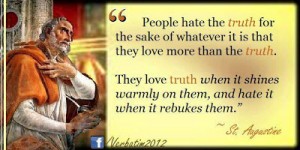 Born into the Roman Empire in 354 near Carthage (modern-day Tunis), Augustine was soon seen as a man of promise. Of mixed parentage—dad was a pagan and mom was a Donatist Christian—Augustine was given the best education money could buy. As a gifted student of rhetoric, he studied Vergil’s Aeneid (the study of which he later regretted), Cicero (from whom he received an urge to philosophize), and Plotinus (from whom he received a grounding in Plato and Aristotle). When you put these three together, you find that Augustine was on a quest (as was Aeneas) for wisdom (à la Cicero) for the meaning of his life (per Plotinus).

His ambition, inculcated by dad at an early age, led him to achieve the pinnacle of success—sainthood—once he found the right institution. But it took some false starts before he lighted on the Roman Catholic church. Though his mom was a Christian, he became a prominent Manichaean for most of his pre-Catholic life, attracted to its preference for the spiritual over the the material. It was only when he became dissatisfied with philosophical problems of Manichaeism that he turned to Christianity. 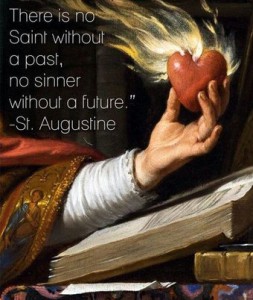 As we see in his Confessions, Augustine was never much of a sinner. His indiscretions and sexuality were seen by none of his contemporaries—not even his mom—as ‘sin’. Instead, he came to see anything that turned him away from God as sin. And for that reason he came to see himself as a kind of Everyman of sin. This man, who gave us the concept of ‘original sin’, came to see his life as a kind of re-enactment of the fall of man. His life was, for Augustine, all of our lives. I find it fascinating to read his account of himself and his weaknesses—always seen through the lens of himself as fallen man—interweaving his thoughts, feelings, and personal experiences with various philosophical and religious traditions. And I get thoroughly absorbed by his dazzling use of reason, scholarship, and rhetoric to meditate on the relationship between memory and time, the limits of free will, the origin and nature of evil. He is a great writer, and you will find that the last three books of the Confessions serve as an excellent preface to the first 10, just as the first 10 are prelude to the final three. Confessions can and should be read over and over; it’s the perfect deserted island book.

Perhaps Augustine’s stormy spiritual adventure continues to resonate with me today, after 16 centuries, because he was a profound lover: he loved women, he loved his friends, he loved wisdom, he loved success, and, finally, he channeled this love toward God. The remainder of Augustine’s life was spent in hot pursuit of the One he loved. Augustine is a riveting figure, even for me, a lapsed Catholic. Whether I agree or not with his answers, Augustine gets me thinking more deeply about what it is to be human and to live this human life.