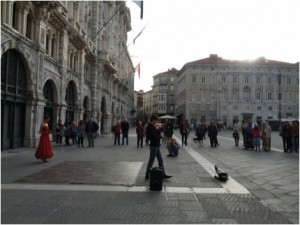 I flip pages of my memory like the pages of the many books we’ve read together. What do I come up with? The flotsam and jetsam of a world modern and yet defined by the ever-present layers of its past, its names, its words from many tongues, its wisdom, and its woes.

For author Jan Morris, Trieste is a place for outliers, for loners and exiles. Writing about the city in 2001, she saw it as a place of flow and transience, a place of “tristezza,” a kind of gentle melancholy that comes from the fact of being a borderland, going back and forth, and back, with the vagaries of power and plunder and pride. (Jan Morris, Trieste and the Meaning of Nowhere, 2001)

Here are few more impressions and reflections from our recent Travel Pursuit in Trieste and Rovinj, with Trieste’s poet, Umberto Saba, taking pride of place:

“A curious antiquarian shop
Is open on an obscure street in Trieste.
Various golden hues of antique bindings
Delight the eye that wanders across its shelves.”

“Often, returning to my house
I take a shadowy street of the Old Town.
A few puddles reflect the yellow
of a few lamps, and the street is crowded.” 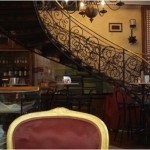 Trieste is the capital of coffee, importing as it does in its great commercial port most of the coffee consumed in Europe. But drinking coffee in Trieste is an art, and café culture is a way of being and of making one’s life: “A café is a place where you can be by yourself and among people at the same time.” (Claudio Magris) We visited the important and the hidden coffeehouses, the ancient water-bordering ones like Caffè Tommaseo, and those at the top of the hill at the end of the Opcina tram line, the cafés haunted by Joyce and Svevo, and those as anonymous as the people who frequent them.

The world of books was the parallel world we lived in for the ten days of our visit and oh, the worlds we had the privilege and challenge to step into! From the turn-of-the-century odyssey of James Joyce’s Leopold Bloom and Stephen Dedalus to the magic realism of Téa Obreht’s Balkan war-haunted saints and survivors, we leafed through the lives of others and felt the reverberations in our own. 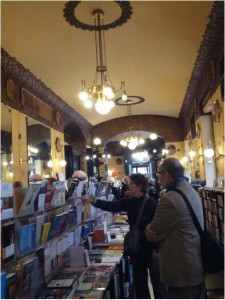 Was it really Gibraltar Joyce was describing in Ulysses, or was he looking out the window to the byways of old town Trieste or of Muggia, just a short boat ride away? For Laura Pelaschiar, one of our local experts from Trieste’s Joyce School, the answer was as self-evident as the lighthouse on the bay:

“O and the sea the sea crimson sometimes like fire and the glorious sunsets and the figtrees in the Almeda gardens yes and all the queer little streets and the pink and blue and yellow houses and the rosegardens and the jessamine and geraniums and cactuses ….” (from “Penelope”, in James Joyce’s Ulysses)

We entered the worlds of Svevo, of Rilke, and of Freud … the aura of melancholy and melodrama, of neurosis and of rippling anxiety, of angels and of human, all too human, spirits of the deep.

We felt the weight of the ages in the old stones of Rome’s theatre and fortifications, but also the rollicking happiness of school children dancing to blaring pop music in the light-filled square of sleepy Muggia. 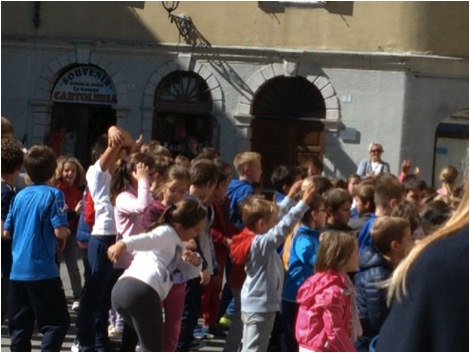 Trieste is nowhere, it is everywhere. It’s a place of human contact and of profound regret and longing. It’s a place where one senses the weight of the body indulging in the popular street food of the roasted pork buffets. It is also a place where spirits lift and soar as the wind of the Karst bora begins to blow.

It’s a place of high culture, fast commerce, and intellectual seriousness. It is a place that proffers a sea of self-indulgent pleasures and simple, everyday enchantments. Like this one, for example: 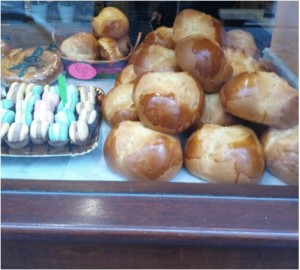 Once you get the bite, it’s hard to let Trieste go. For more photos of the trip, please see our slide show on YouTube. 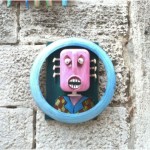