In scope, detail, and humanity, Thomas Mann’s Buddenbrooks is a classic of modem literature and continues to be a model for family sagas, a genre of literature which follows generations of a family through a period of history. (Think Downton Abbey, The Forsythe Saga, The Thornbirds.) Buddenbrooks was Mann’s first and is his most enduringly popular novel. Thomas Mann was awarded the Nobel Prize for literature in 1929. 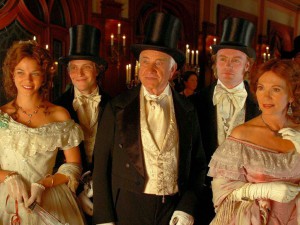 Buddenbrooks charts the decline of a wealthy bourgeois family in northern Germany in the 19th century. Changing times present each successive generation with increasingly difficult choices between duty to the family business and self-fulfilment through art. We become totally absorbed in the decades of births, weddings, divorces, gossip, travels,  philosophical discussions, musical performances, and funerals, as the family slips from prosperity to bankruptcy, from stability to artistic decadence and even madness.

The novel is highly autobiographical. The character thought to most resemble Mann is young Hanno, the artistic son who did not fulfil his family’s expectations to rescue the family fortune and whose early death signals the end of the dynasty. Historians and economists sometimes refer to the Buddenbrooks effect, referring to the tendency among family businesses to decline over several generations.

However, the young Thomas Mann assumes a point of view that casts no judgement on the choices made by the members of the family. He retains a sympathetic detachment to each of the richly drawn personalities as they struggle between a conventional bourgeois life and an artistic one. One of the most famous aspects of Mann’s prose style can be seen in his use of leitmotifs, a technique he adapted from the music dramas of Richard Wagner. For example, the colours of eyes, teeth, an upper lip, and hot chocolate allude to different states of health, personality and even a character’s destiny.

As a choral conductor and composer I have spent a great deal of time on the challenge of setting words to music. It was a wonderful discovery to find a writer so intent not just on including music in his work, but at times using detailed descriptions of musical compositions as critical turning points in his novel; a novelist intent on setting music to words.

The last of the Buddenbrooks line, Hanno Buddenbrook, becomes a musician – like his mother and Thomas Mann’s mother. Mann describes one of his compositions, writing specifically of keys, modulations, and chord progressions: Hanno’s music is in fact taken from Wagner’s Tristan und Isolde.

Near the end of the novel, young Hanno Buddenbrook improvises at the piano; Mann’s prose becomes the music, and again Mann includes a very detailed description of the music with keys, chords, and dissonances resolved to consonances. It is the music of the “Liebestod,” the music that  enraptured Mann at an early age. But it is also the music of Hanno’s illness,which follows immediately after this “improvisation.” It is the struggle of Thomas Mann – to love the world of Richard Wagner, but to be able to leave it, to critique this late romantic world in order to be able to move on. And Mann did move on; while Buddenbrooks is a work that can be seen, like Wagner’s music, as a collection of important ideas and trends from the 19th century, the book introduces a new century, with deep psychological insight into character, the interweaving of many themes in what could be seen as a contrapuntal style, and an element of detachment and irony mixed with compassion in the narrator’s voice.

I invite you to join me next summer in an exploration of this great book and the great music that was so important in its creation. We will use John E. Woods sparkling new translation.

For further information and to register click here. Buddenbrooks: The Decline of a Family by Thomas Mann