Céleste Zurbrigg from Edmonton, Alberta, was a participant on the Classical Pursuits India trip. She has been keeping travel diaries for a long time, and this post she shares some entries from the trip through Delhi, Agra, Jaipur, Narlai and Varanasi.

January 13, Arrived in Delhi
Twenty-four hours after my planned take-off from Toronto, I found myself on the plane, sitting next to a 28-year-old Sikh for our first leg to Brussels. In fact, he and 15 other people from his extended family were on their way to Punjab for his brother’s five-day wedding.

We landed at the very large and impressive airport in Delhi, and I was met by a rep from the tour company. As we left this modern building and were driving to our hotel, the India that we see so often portrayed was there as expected: the rundown buildings; the red dirt along the streets and the shanty neighborhoods. There was a strong smell of smoke, and I learned that many people have small open fires outside to keep warm. When we got into our hotel, we walked back into an oasis of comfort. The name of this trip is called, “Confounded and Bewitched in India.” How could we expect anything different?

January 14, Delhi: Government Sector; Indira Gandhi Museum; Humayun’s Tomb; Qutb Minar
After a nice buffet breakfast, we met Gary, our tour host, in the hotel lobby. He brought me up to date with the briefing that I had missed yesterday. I met our tour guide, Ashish, who will be with us for the whole tour. 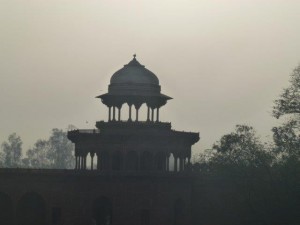 Delhi is one of the world’s great cities, containing an astonishing array of forts, tombs, mosques and government buildings constructed over the past 1,000 years. It is also a brashly intimidating modern megacity, with more than 15 million inhabitants – and many first-time visitors find it all a bit daunting. But it has a gently addictive quality, and deserves to be explored slowly. For anybody who is interested in architecture and history, it is one of the most remarkable cities in the world.

As we were leaving Humayun’s Tomb, a group of college girls approached a few of us and interviewed us. This was a homework assignment to ask tourists why they had come to India. After answering them, I then asked them questions about their favorite Bollywood stars. I received many replies. As I have seen a few Bollywood movies, I was able to talk about a few of them. This led to my request for them to do some Bollywood dance moves. After a few of them did some, then I showed them a polka step. We all had great fun.

January 16, Drive to Agra: Taj Mahal
This morning we set off for Agra. We checked into our hotel in the late afternoon and drove to the nearby and very famous Taj Mahal with our local guide, Navneed. The palace may be a visual cliché, but it is also one of the few architectural icons that surpasses expectation. What makes this monument interesting are the perfect symmetry, the wonderful proportion and the sheer scale. 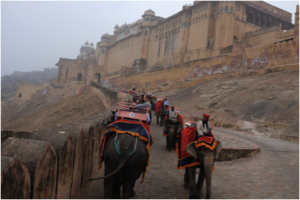 We drove north out of the city, and we took a step back in time and traveled as the maharajas did, approaching Amber Fort on elephant back. We did this by climbing a platform that allowed us to sit on the elephants in twos. As we lumbered up the hill to the fort, we had great views of the surrounding area. We had so much fun yelling to each other as various elephants passed others. There were sellers along the route taking photos or trying to sell us items. At one point a seller threw up a carpet at Sally, with whom I was sitting, and she caught it. We all had a good laugh and she quickly threw it back to its source. I so enjoyed the ride, being able to view how the mahout handled the elephant while sitting on the beast’s neck. All the while the elephant flapped his ears back and forth.

January 19, Jaipur: City Palace Museum; Jaipur Literary Festival
Before we left for the day, we had a session with an Indian author. Professor Jasbir Jain retired after a long and very active career. She is currently working on a book about forgiveness and its importance in international affairs. She was a wonderful person, and we were invited to ask her any questions about India. It was indeed another fabulous surprise that our guides provided us.

January 22, Drive to Narlai; Turban Tying and Sari Demo Cocktail Party
We arrived at the 17th-century village of Narlai. This is a small village, still tied to agrarian rhythms of the day, with farmers going out to work their fields.  We saw the small mountain that we will climb during our stay. It has a large white elephant statue on top.  Our accommodation for the next two nights is a magnificent restored hunting lodge, now a delightful heritage hotel.  We were welcomed with a marigold necklace, along with lime juice and moist towelettes presented in a nice basket. The staff wears the most interesting turbans and uniforms. This place is still owed by the Jodhpur maharaja.

We held our first book discussion this afternoon in the main courtyard. During this time the cyclists we saw on the road arrived in various groups.

At 6:30 p.m. Ashish provided Indian rum and gin along with snacks. A staff member showed how to wrap their style of turban, which is kind of snake-like. Then we each tried doing it ourselves. At first we were trying to help each other, but Ashish wanted us to do it our own.  This way we all had our own unique designs. So much laughter and photos ensued. Then the woman who had welcomed us showed us how to tie a sari, using Lisa as our model. Apparently there are over 100 ways to tie a sari.

January 23, Narlai: Yoga
We attended a 7:30 a.m. yoga session that Ashish had arranged for us. The yogi drove two hours from Udaipur this morning. We started out by breathing the yoga mantra “Ommmm.” What a great opportunity to do yoga in the land of its birth. With this kind of yoga, our yogi has us finish our session by laughing very loud. At first we laughed artificially, but then we all started laughing very genuinely. Laughter is indeed a good medicine!

January 28, Varanasi: Sunrise Ganges Boat Ride
When we boarded the boat we were welcomed with marigold necklaces. In addition to the two rowers in the back, there were two musicians in the front that our guide had hired. As we were heading upriver with dawn breaking, we observed the bathers and people doing their yoga. Ajit recognized one man who is there every day. He told us that the man will often laugh out loud, like we had done in the yoga class in Narlai. Presently he was silent, so some of us in our boat started laughing out loud. We smiled and held our arms up. He immediately got it, and started laughing back towards us. What a defining moment for us! 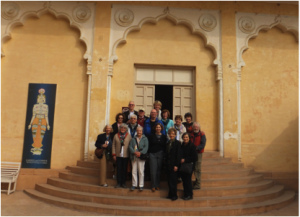