[Editor’s note: We warmly welcome Denise Ahlquist back to Toronto Pursuits. A senior consultant at the Great Books Foundation, Denise has been a longtime leader of discussion groups for children and adults. Join her on an unforgettable journey in her seminar on Chaucer’s Canterbury Tales.] 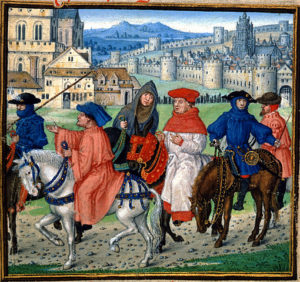 “When April comes and with its showers sweet
Has, to the root, pierced March’s drought complete….
Then folks, too, long to go on pilgrimage….”

Written over 600 years ago and one of the first masterpieces of post-Norman English, Chaucer’s Canterbury Tales remains as wry, perceptive and fresh as ever. The famous General Prologue’s call of anticipation — “when Zephirus with his sweet breathe inspires life anew” — rings eternal, for spring still stirs something in many of us, something that moves us, brings us out of ourselves and perhaps even together.

Who can tell what happens when we venture out and begin to interact with folks whose lives and perspectives may be very different from our own? Can we hear each other’s stories? Do we share tastes, values, language, cultural roots, or anything at all? Do we see one another? Create community? Find ourselves? What modern readers find in these tales is a sprawling literary cornucopia of a world unlike our own and yet so timeless — for it seems jokes are still joys and
morals still provide lessons, and perhaps finding truths still requires a journey.

Accompanying us on this journey are a genial host and 29 pilgrims, off to Canterbury Cathedral for the salvation of their souls, and an author keeping watch in both body and spirit. In a way that seems modern, Chaucer himself goes with us not only as poet, but as pilgrim, collecting all the points of view into a community bound only by the imaginations of the listener-followers. He simultaneously observes and creates tellers you can’t forget, like the indomitable Wife of Bath, the comic Miller, the envious Reeve, and the variety of “religious.” They, in turn, tell tales that both conceal and reveal the teller, with messages explicit and implicit, all in language rich with the trappings of the society they inhabit and rich with the irony of interpretation. Is Chaucer critiquing, mocking or just describing his pilgrims? How can we tell the teller from the tale? The Man of Law calls this poet-pilgrim out by name:

“But Chaucer, clumsy as he is at times
In meter and cunning use of rhymes…
has told more of lovers up and down
Than even Ovid honored with renown
In his Epistles, which are very old
Why tell them all again since they’ve been told?”

Why? Because the late 14th century saw a great birth of literacy among the common people of western civilization, and the writers of this time responded to a great hunger for story. Where for centuries text had been the instrument of the clergy and a sectarian elite, now townsfolk and other lay people were beginning to be taught to read as expanding commercial and cultural interests demanded literacy for record keeping and communication. Chaucer brings these ordinary people to life, simultaneously celebrating them and revealing their flaws. And where for centuries the language of texts was a cloistered tongue one had to be initiated into, speaking largely of spiritual matters, these newly literate people were discovering the joy and utility of reading of ordinary experiences in one’s everyday language, especially when employed by such a skilful writer.

On the Continent, great authors like Dante and Boccaccio were already writing literature in the vernacular, providing inspiration in a language a wider audience could understand, as well as a creative inspiration for Chaucer. A frequent traveller to western Europe, Chaucer admired the literature enriching the lives of people there, and dearly wanted this level of great literature for his own evolving English tongue and his fellow English men and women. The Canterbury Tales ably fulfils this aspiration through the diversity of language employed by the characters, as well as in the wide range of literary genres used in their tales. Journeys are often measured by what we bring home.

England in the time of Chaucer was in the midst of many changes, including a widespread literary resurgence. The first books for sale began to be offered (as opposed to commissioned work). A merchant class was gaining power, and subtly challenging the stability of the feudal system. Chaucer’s biography provided him with a unique position from which to observe and question these changing times.

Most of us think of it as another world, a medieval storyboard both of lost things like knights, squires, friars, clerks, and eternal ones like passion, love, husbands and wives, hypocrites and
swindlers. It was a world full of moral certainty and of faith in the hierarchy, imbued with an almost obsessional assuaging of religious doubt. It was a world that may seem to us to be more
simple, but it was not. Plagues had repeatedly struck the British Isles, and this literary resurgence emerged from the wake of destruction, reflecting both stirrings of doubt in the great
church that was to be their protector and a labour shortage that redefined the relative values of land and people. In his lifetime, two popes and a peasant revolt literally passed under Chaucer’s
very door. Interesting times indeed — all viewed from the perspective of a man whose life bridged the classes and whose poetic genius enabled him to create a microcosm of his world that has stood the test of time and inspired readers and other writers for centuries.

We have our own interesting times, and we must make our pilgrimages within them. Perhaps as we read the Canterbury Tales, we discover that our search for modern sense-making is not so
very different from what was dreamt by this medieval poet. When we journey back to this changing world, we may find we bring back perspectives that enrich our own. Indeed, we may become more aware of ourselves as fellow creator-pilgrims in our world as Chaucer is pilgrim in his, watching and listening, still susceptible to the call of the poet-author Chaucer’s faith in character, to his irony, and still striving for story – the wonderfully complex mix of comic and
serious tales we need to help us critique and make sense of a confused world. Come, pilgrim, tell us your tale. Join me at Toronto Pursuits 2019 for Chaucer’s Canterbury Tales.