ON THE ROAD WITH ANN – Confused by Communism in Vietnam

Written by Classical Pursuits on Oct 31, 2012 in Journal, On the Road with Ann, Travel Pursuits
On flight from Hanoi to Ho Chi Minh City (formerly, and often still, known as Saigon). First, I want to say how the hearts of all of us on this trip are concerned for those who have borne the wrath of the benign-sounding Sandy. I hope you are all safe and that life is returning to normal.Much to report about our first few days in Vietnam but will try in these few minutes to speak only of early and confusing early impressions of Communism is Vietnam. What do you associate with the legacy Marx and Lenin? Slogans and propagandist posters? Yes, they are everywhere. But that’s about it.

Communism here appears to be a mysterious muddle of slogans, unfettered capitalism, an elite one-party government that got out of the business of public service in 1986, a population still divided by north/south, and a deep belief (which they say is not religion) in one’s fortune being determined heavily by the zodiac and ancestor worship.

Corruption is openly acknowledged to run rampant. I gather young people are not much interested in becoming members of the one party. Our guide, Ha, spoke freely. He seems loyal to the system. His father, who lost an eye in the war, was a teacher of Communist theory to workers, but neither he nor his brother are interested in joining the party, because they would have to work for the state where the pay is lower.

Up until 1986, the government planned, owned and distributed all goods and services. People were starving due to meager controlled rations. Seems that when the government got into economic control, it also largely got out of the business of health, education and welfare. Ho Chi Minh is revered (at least in the north), but I wonder if this is the society he envisioned.

You worship your ancestors by making offerings twice a month, according to the lunar calendar, of incense, fruit, candy and cookies and fake money (in both Vietnamese and US currency). The money is burned in little red boxes shaped like a pyramid.

I will conclude this piece with one more observation and one caveat. The people we have met and have been uniformly gentle and calm. Even on the crazy streets where motor scooters, bicycles and cars zig and zag around terrified Western pedestrians with no attention to lights or lanes, there is no yelling or road rage.

The caveat is that we have been here only a few days, so please take all I say with a heavy dose of salt. But I must say that the reading we did in advance (and even the encounter with censorship) has helped prepare us (to some extent) to interpret what we are experiencing. Hope to find time to write about philosophical principles of yin and yang while on the Mekong River. Discussions start on the boat. 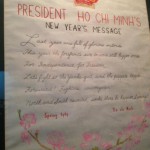 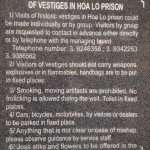 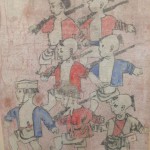