ON THE ROAD WITH ANN – In Search of the Newfoundland Soul

Written by Classical Pursuits on Aug 26, 2011 in Ann's Musings, Journal, On the Road with Ann, Travel Pursuits

I had hoped to write day by day from St. John’s and from Eastport. Full days and lack of Internet access prevented that. So much for On the Road with Ann.

This was my second visit to Newfoundland.  My enchantment with The Rock (as NL is commonly called) continues to grow. If you have never been to this remote corner of the world, you may be puzzled by the extravagant praise it garners from native Newfoundlanders and those “from away” alike. If you have visited Newfoundland, even once, you know what I mean.

Here are some random jottings of my impressions. <Click on the links. If you put your cursor over the image, you will get a caption. If you double click on the image, it will enlarge.>

This is where European civilization first made landfall in the New World.  It is generally accepted that Norsemen from Greenland visited Newfoundland and Labrador as early as 1001 A.D. In 1497, John Cabot arrived with his sons, having obtained from Henry VII a charter giving him and his sons authority to “sail to all parts, countries and seas of the East, the West and of the North, under our banner and ensign,  and to set up our banner on any new-found-land.” A former colony and dominion of the United Kingdom, Newfoundland and Labrador became the tenth province to enter the Canadian Confederation on March 31, 1949.

We spent the first five days in the colourful and hilly port city of St. John’s, the capital of Newfoundland. We spent the next five days in Eastport, a tiny village three hours north of St. John’s, where we attended the 10th annual literary festival, Winterset in Summer. The festival was founded by Canadian journalist and author (and my friend), Richard Gwyn, to honour his late wife, Sandra, a NL writer too.

WEATHER – There is lots of weather in Newfoundland and Labrador.  When we arrived on August 6, it was a cold, windy, foggy and rainy day, unusual for this time of year. But heavy weather is a fact of life in Newfoundland, so we did what the locals do and ventured forth. 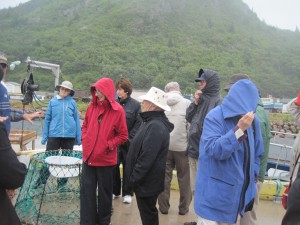 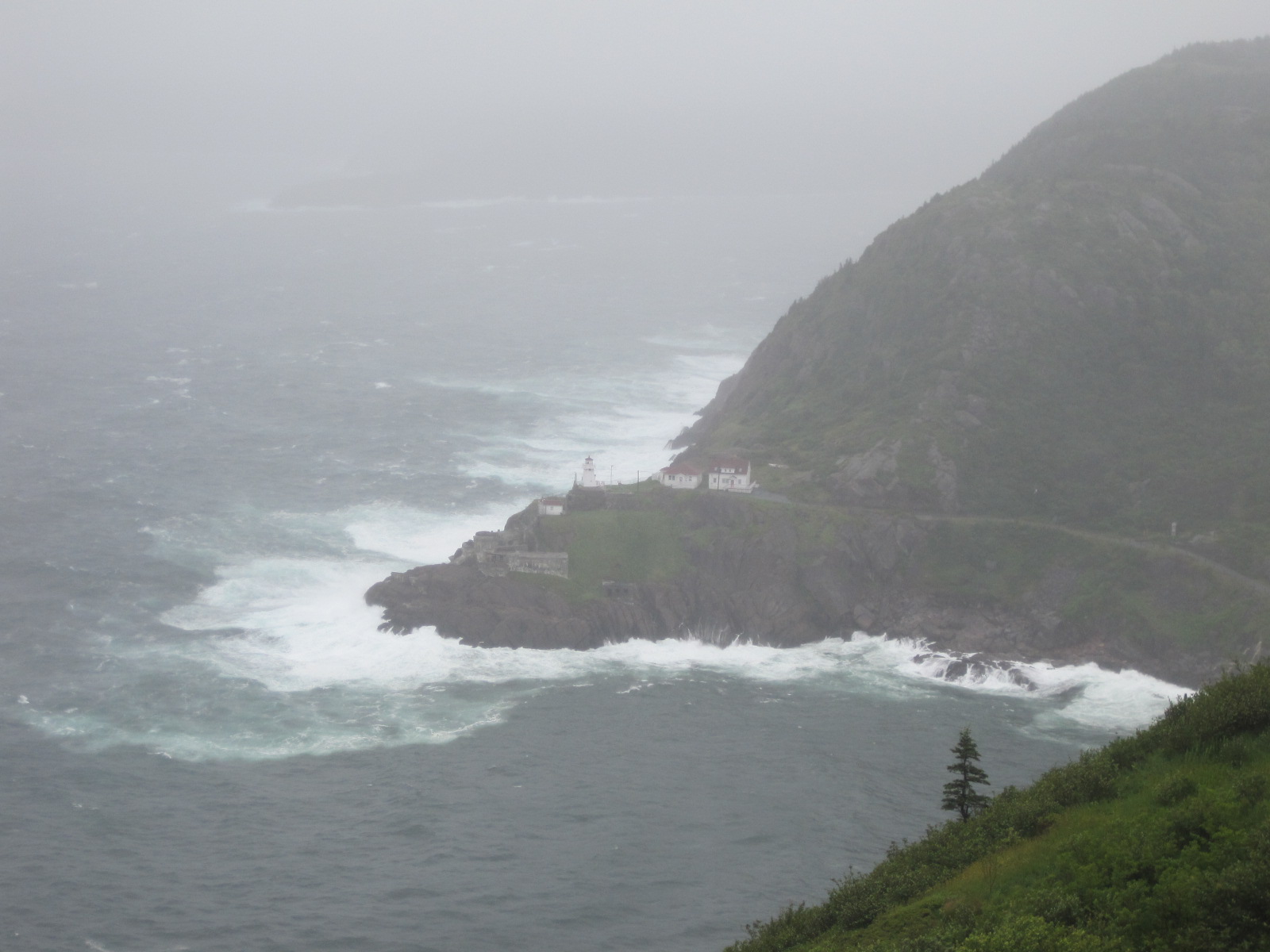 The sun made a glorious reappearance when we were in Eastport. Helios had not been seen in some parts of Newfoundland for 72 days! Sure, everyone came out to bask in its wonder. But unlike where we all come from, we didn’t hear a single complaint from locals, just a bemused apology to those of us “from away.” 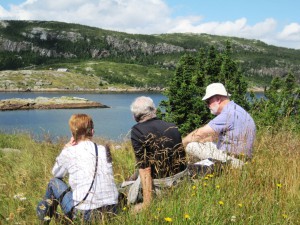 NATIVE VS FROM AWAY – This distinction is made in many parts of the world where most people stay put. I think this fierce attachment to place and one another is especially deep in Newfoundland. Those forced to leave to make a living come back as often as they possibly can, and many now “commute” to jobs in Alberta and the Canadian north. When away, Newfoundlanders seek out one another’s company.  This blind love citizens hold for the place may be because Newfoundland is a remote island isolated from the rest of Canada and because it was populated long ago by largely homogeneous migrants from the west coast of Ireland and the English West Country. It accounts, no doubt, for much of its rich storytelling tradition. The flip side is that it is somewhat tough for new settlers to feel as though they really belong. Visitors are a different category and made to feel most welcome.

HOSPITALITY – Everywhere we went, locals were warm, friendly, helpful and eager to do whatever they could to make our trip wonderful. This started when I was in Newfoundland in 2007. I was attending Winterset in Summer in Eastport and casually struck up a conversation with Elayne Harris, a native Newfoundlander who had been living away for many years. We struck up a conversation and a long-distance friendship ensued. The idea for a Classical Pursuits trip was born. Elayne has now moved back to Newfoundland and went to extraordinary lengths to plan every detail of this trip. She also selected the books we read and led our discussions.  Once in Newfoundland, everyone we encountered went out of their way to show us warm and down-home hospitality — from folks on the street we asked for directions to all the service people in restaurants or guides at sites we visited to Norma and Walter Pinsent, local artists, in  Eastport who invited all 17 of us into their home for a sit-down dinner of fresh-caught cod and lobster, and their music-making friends who turned up after dinner. 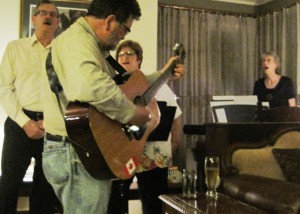 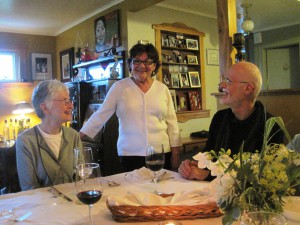 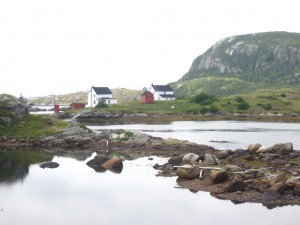 e natural landscape is breathtakingly beautiful. It is hard to take a bad photo. Around every bend on the road or crest of a hill, are water, rock, and wildlife, each view different from the one before. The manmade buildings are small, practical, and harmonious with the land.

LANGUAGE — In Newfoundland, they talk funny. Or at least that’s how it seems at the beginning. An Irish lilt, unfathomable expressions, routinely calling us “love” or “darling,” adding an “s” to the end of all verbs (especially where it doesn’t belong), we soon got used to the sound and were charmed by Newfoundland English.

A commonly encountered expression is, “Whadd’ya at, b’y?” (What are you at?), loosely translated to “How’s it going?” or “What are you doing?”

Interested in learning a bit more? Here’s a lesson in Newfinese.

MUSIC – Most traditional Newfoundland music is another way of telling a story. We tried learning a few songs ourselves, with limited accomplishment. But we did hear wonderful songs in the home of the Pinsents.

I lost the video I took of that evening, but here is one such song. Jack was Every Inch a Sailor and here is one in French that I did manage to capture a bit of at a storytelling session at Winterset.

BOOKS – We read and discussed two books that, ostensibly, were about the same thing – multi-generation sagas  in the harsh world of remote fishing villages. If that sounds like dull literary fare to you, I assure you it’s not. We loved the complicated family ties and antagonisms in Random Passage by Bernice Morgan. But that book, which can be classified as historical fiction, barely prepared us for the imaginative masterpiece of Michael Crummey’s Galore. Aptly titled, there are fish galore, stories galore and oddball characters galore in this romp through more than 100 years of Newfoundland’s past. The book does not ignore the great deprivations that beset the Rock but its pitch perfect prose creates an enchanted world that tilts between the extremes of survival and celebration, with the emphasis definitely on the latter. It was a fun book to read and Crummey said it was a fun book to write.

We were doubly blessed to

be attendees at the fabulous and informal Winterset in Summer, where Michael Crummey was a participant. Two of our fellow travellers, Connie and Craig Walley of Columbus, Ohio, were interviewed on CBC Radio along with Michael Crummey.  Here is an audio clip of the interview.

Michael, as we quickly came to call him, graciously accepted an invitation to join the rest of us for breakfast at a house we had available to us. He talked freely about the rigorous research and deep pleasure involved in writing Galore, read a juicy bit, and indcated he has returned to poetry for the time being.

Did we find the Newfoundland soul? I actually think we did. Newfoundland. to me, is a touchstone for both what is to be celebrated and what is to be endured in life. Newfoundlanders are not naive Pollyannas; nor are they suck-it-up stoics. Newfoundlanders have taken a stark and dangerous landscape and populated it with imagination. We have been beguiled by Newfoundland. Now, how to sustain its magic in the far-flung places where we live? We can revisit its rich and ringing literature from our armchairs. But I suspect that regular return visits may be called for.