ON THE ROAD WITH ANN – India and its afterglow

Written by Classical Pursuits on Mar 27, 2012 in Journal, On the Road with Ann, Travel Pursuits

Our days were full of paradox and mystery. One does not return from perhaps the most spiritual and sensuous place on earth having “made sense of India.”

In sifting and percolating my impressions, I am reminded of a continuing theme in one of the books we read, Salman Rushdie’s Midnight’s Children, awarded the best Booker Prize winner of all time. An event from a person’s past gains meaning for that person’s present only when it is filtered through memory and incorporated into the overall story of that person’s life.

“I told you the truth,” [Saleem to Padma] I say yet again, “Memory’s truth, because memory has its own special kind. It selects, eliminates, alters, exaggerates, minimizes, glorifies, and vilifies also; but in the end it creates its own reality, its heterogeneous but usually coherent versions of events; and no sane human being ever trusts someone else’s version more than his own.”

Maybe India teaches us as much about humanity in general as it does about itself.

I managed to write only a few blog posts while away and thank friend Lisa Nabieszko for managing the technology from home. You can find them here. Although I hope to write more, for the time being, I’m letting my camera tell some stories. In my western way, I have grouped the photos by category, fully aware that India defies categories.

A poor hamlet that is rich in spirit

Man made beauty in India

The many faces of God in India

‘Vela’ – the art of doing nothing

Now, after viewing the photos, have they whetted your appetite? If so, come back with me to India next January. We will participate in the Jaipur Literature Festival, Asia-Pacific’s largest and most prestigious literary festival. It encompasses a range of national and international readings, talks, debates, performances, workshops and interactive activities, and is held in the beautiful Diggi Palace in the Rajasthan capital of Jaipur. http://tmagazine.blogs.nytimes.com/2012/03/05/palace-coup-jaipurs-literary-festival/

We will visit the best of North India’s urban and village sites, engaging with Indian citizens every step of the way and conclude our trip in Varanasi, the astonishingly intense ancient city on the Ganges River, known as the city of burning and learning. Burning because corpses are cremated along the holy Ganges. It is believed that if one is burned alongside the Ganges one can attain moksha or liberation from the cycle of rebirth. Learning because Varanasi has always been a city of academic and spiritual education. We will return to the immensely moving and optimistic programs of World Literacy Canada. The highlight of my trip was an encounter with Kusum Kumari, the beguiling nine-year old girl whose education I sponsor and the edenic hamlet where she lives and in which most women are engaged in literacy training and community development.

Of the several thousand photos I took, maybe this image best captures ‘my’ India – exotic, sensuous, hospitable, and, like all countries, imperfect. 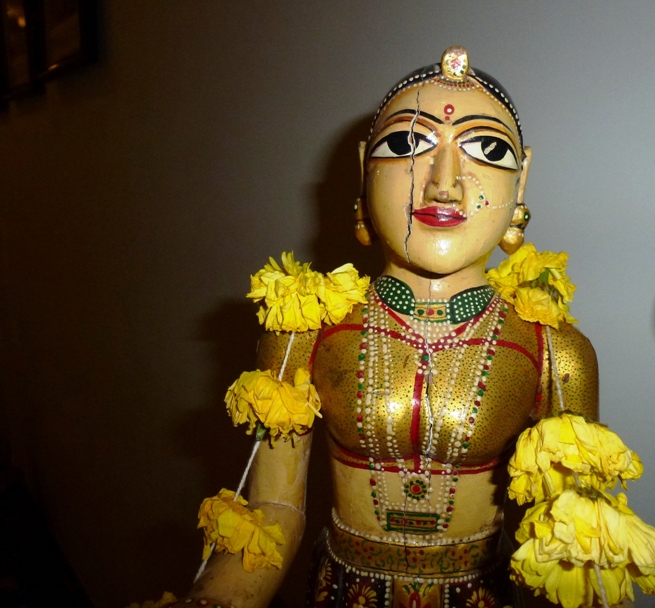