ON THE ROAD WITH ANN – Life and Art in Renaissance Florence

Written by Classical Pursuits on Nov 16, 2011 in Journal, On the Road with Ann, Travel Pursuits

At precisely 9:30 a.m. we were led through the Uffizi Gallery to a door I never would have noticed. The door opened and we passed out of the Uffizi into a narrow corridor on top of the Ponte Vecchio. The Vasari Corridor was designed by Giorgio Vasari in 1564 for members of aristocratic Medici family so they would not have to walk on the street like ordinary Florentines. The corridor can be visited only on rare occasions, by reservation, on a guided tour. We were the only ones there; the quiet was a sharp contrast to the bustling museum. The windows of the corridor gave us glorious views of the Arno River, and its walls held a self-portrait collection, unique in the world. Our leader, Sean Forester, himself a classical painter, helped us understand how artists from Velazquez to Rembrandt to Cecilia Beaux and Marc Chagall choose to represent themselves. Self-portraits are perhaps the most personal statement a painter can make. Yet we could see clearly the spirit of each age; we were offered a glimpse of humanity from 1600 to the present.

This was one highlight from Art and Life in Renaissance Florence, our recent trip to Italy (October 30 – November 6, 2011). Every Classical Pursuits trip offers great literature, a great place, and great conversation. Also a convivial group of fellow travellers and a skilled discussion leader. Often good weather and fabulous food. Art and Life in Renaissance Florence had all of those in abundance, but it also had that je ne sais quoi (or should I say io non so cosa?) Perhaps it was the ongoing reverence we hold for “the brilliance of Renaissance Italy, which created an image of man, a vision of human excellence, that still lies at the heart of the Western tradition” as J.H. Plumb describes it. Or maybe it was that our leader Sean Forester, a working artist with a background in the liberal arts, helped us see Florence with an artist’s eyes.

The art and life of Renaissance Florence still resonate today. Textiles and banking were the ancestors of fashion and finance. Brunelleschi’s dome, his churches and piazzas, opened the way for modern engineering and urban design. Galileo led to Newton and Einstein. Our trip captured the breadth and depth of this remarkable time. Our readings and discussions framed our explorations. Dante’s Divine Comedy showed us the transition from a medieval to Renaissance orientation with a growing emphasis on man. In the science, art and writings of Leonardo da Vinci, we saw an exquisite expression of human dignity and potential. Machiavelli gave us a darker view of human nature that was also part of the Italian Renaissance.
Here are a few more highlights from the trip:

Dante and Gregorian Chant at Dusk
We were blessed with uncharacteristically warm and dry weather for this time of year. On a walking tour of Florence we saw plaques that document the places and events of Dante’s time with quotations from the Divine Comedy. Dante’s tower and the tower of his enemy Corso Donati (who was in part responsible for the poet’s exile) stand within a stone’s throw of each other. We visited the church where Beatrice is buried (noting all the love letters in a basket beside her tomb), and the baptistery where Dante was baptised. The 12th-century mosaic ceiling inspired his depiction of hell. In the evening, we climbed a series of steps and terraces to the Romanesque church of San Miniato where we sat quietly in the crypt during the Mass, which included Gregorian chant by resident Benedictine monks. The crypt seemed to be populated by local Florentines, finding this a fine way to end their work day.

Brunelleschi’s Dome
Several of us had read a book by Ross King about one of the towering achievements of Renaissance architecture, and we took an afternoon to climb to the top. At nearly 142 feet, the dome is larger than those of the Capitol in Washington, D.C., St. Paul’s in London, and even St. Peter’s in Vatican City, all of which were inspired by Florence’s cathedral. Not much has changed in half a millennium. We climbed the same steep stone staircases as the dome builders (going between the two shells of the dome) to the top, where the view of the city was amazing.

Hands-on Fresco Workshop
We got to explore first-hand the art of fresco painting by using the same materials and techniques of the Renaissance masters. The session began with a visit to the rooftop terrace of a fresco artist’s studio, where there was much gnashing of teeth by those protesting they could not draw. Then, for the next three hours, we were absorbed in the art of painting on fast-drying damp plaster with water-based pigments. I think most of us were both surprised by our hidden talent for frescoes. Such direct experience of art truly helps one appreciate the great Renaissance fresco cycles.

From City Palazzo to Country Villa
To help us imagine life in the 15th century, we visited a palazzo that recreated a Renaissance home. We visited the kitchen equipped with utensils and elaborately decorated halls for entertaining guests and conducting business. Like Florentines past and present, we made sure to escape from the city into the surrounding hills. We spent a glorious afternoon and evening at a rambling old villa in Fiesole. Some of us walked through the olive groves to see how olives are harvested while others enjoyed tea on the terrace. Another day we walked through the majestic Boboli Gardens to Sean’s apartment with a great view back over Florence. Over wine and olives, Sean showed us his own drawings and paintings, portraits, nudes and landscapes. It was fascinating to hear him analyze his own work, what he was attempting, where he felt he has succeeded and where he thought he had missed the mark. 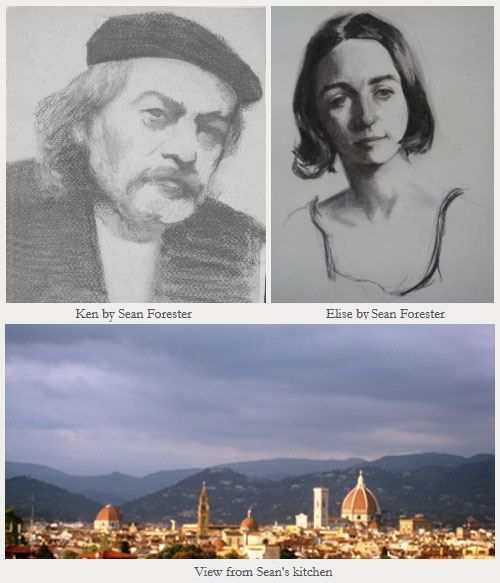 A Walk Through 200 Years of Art
In the Uffizi, Sean led us through the evolution of Italian painting, from Giotto’s break with the medieval past and through a pantheon of Renaissance painters — Lippi, Botticelli, Leonardo, Michelangelo, and Titian. Sean helped us appreciate technique and composition as well as symbolism and narrative. He shared his gift of the artist’s eye wherever we looked – the Fra Angelico frescoes at San Marco, comparing the Davids of Donatello and Michelangelo, the classically proportioned buildings of Brunelleschi. We saw the great diversity of artistic expression in Renaissance Florence, from the beautiful Madonnas of Lippi to Donatello’s harrowing Magdalene.

The Last Lunch
All too soon, it was over. After a morning at the art school where Sean taught, we again went out of centre of Florence for our farewell lunch at Omero restaurant. From the street, it was a modest storefront. We passed through a deli laden with hanging hams and produce to a comfortable room with lots of big windows. We had eaten very well all week, but this meal was exceptional. As was our conversation. But then there was the light. I could not stay in my seat. The sky was semi-overcast, with patches of light shifting over the gorgeous hills. We said our farewells, then, some on foot and some in taxis, we made our way back to the Hotel Silla to pack.