ON THE ROAD WITH ANN – Mystery & Manners in Savannah

Written by Ann Kirkland on Apr 22, 2015 in Ann's Musings, On the Road with Ann, Travel Pursuits

I was mulling over my impressions from our fifth trip to Savannah and was struck that this Travel Pursuit differs from others in a strange way.

Most of the time I find the literature and the place complement and enrich one another. Even if we are in Florence discussing Dante, who wrote in the 14th century, or in Iceland discussing the sagas, which were written even earlier, the place helps bring the texts to life. 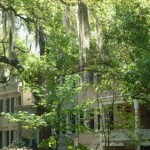 No so with Flannery O’Connor, one of America’s greatest fiction writers. O’Connor was certainly a product of the gracious and genteel Savannah where we stayed and wandered — flaunting antebellum mansions, cobbled streets, historic squares, and spreading Live Oaks dripping with Spanish moss. 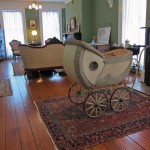 We visited her childhood home and walked the streets of her neighbourhood for her first thirteen years. 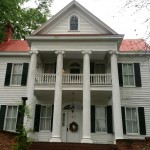 We also travelled up the road a piece to Milledgeville where she lived in a stately home while attending high school and college. And we spent the morning at Andalusia, the family farm where she lived and wrote in her final years and where she died of lupus in 1964 at the age of 39. 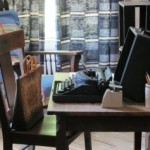 We peered into the spare room where she spent the mornings typing at her small desk.

There is no doubt that Flannery O’Connor captured the Southernness of her region, even though it is not the south we saw. She had a sharp eye and ear for the sights and sounds of her native land. And she is very funny! Here is a description of socially-conscious Mrs. Turpin trying to get the measure of  the other patients in a doctor’s waiting room in “Revelation.”

“Without appearing to, Mrs. Turpin always noticed people’s feet. The well-dressed lady had on red and gray suede shoes to match her dress. Mrs. Turpin had on her good black patent leather pumps. The ugly girl had on Girl Scout shoes and heavy socks. The old woman had on tennis shoes and the white-trashy mother had on what appeared to be bedroom slippers, black straw with gold braid threaded through them–exactly what you would have expected her to have on.”

But the world she presents is not all funny. Her eye gravitated to the depraved, the vulgar, and the grotesque.

At first, the stories shocked us and made us uncomfortable. We could not square a barren, godless landscape of meaninglessness, punctuated by pockets of random, mindless cruelty with our knowledge that O’Connor was a devout Roman Catholic. But as we wrestled in our discussions, guided by Rosemary Gould, we gradually came to see that the use of violence, exaggeration, and distortion were used purposefully to shock us into a serious consideration of theological concepts of mystery, grace, and revelation.

“It is only in these centuries when we are afflicted with the doctrine of the perfectibility of human nature by its own efforts that the vision of the freak in fiction is so disturbing. The freak in modern fiction is usually disturbing to us because he keeps us from forgetting that we share in his state.” O’Connor thought that Southerners were able to see and assimilate freaks more readily than people from other sections of the country.

We discovered a writer who was both traditional and contentions, modest and bold, regional and global, witty, wondering, satirical, and solemn. We did not encounter O’Connor’s characters in the flesh, at least that we could recognize, although she, no doubt, would have seen them in us.

CLICK HERE to see a brief slide show of our amazing adventure.