Written by Classical Pursuits on Nov 1, 2012 in Journal, On the Road with Ann, Travel Pursuits

We tend to toss around the terms ‘yin’ and ‘yang’ with some hazy notion that they represent something to do with balance. What we read before we came and what has been confirmed by all we have seen and been told, is that the yin-yang concept is highly specific and is the oldest and most fundamental way all Vietnamese view the world. Yin and yang elements not only coexist but they are dependent on one another.

As with all dichotomies and stereotypes, for course there are no hard and fast rules. But I think our group has all sensed a different energy in Saigon.  Hanoi feels far more ‘yin’ and Saigon feels more ‘yang.’

That said, the population seems united in the very confusing (to me) commitment to ancestor worship, numerology and the Vietnamese zodiac.

Last word for today is a mention of a visit to the War Museum here. Clearly presented from the Communist point of view, the pictures and captions brought back familiar names of places, events, people. The colour photos of Larry Burrows in Life Magazine. I found my eyes welling and my throat choking. I had to leave the exhibit on agent orange and its continuing effects. We learned that the government here looks after veterans who fought for in the winning side, but that civilian and South Vietnamese military casualties are left to the aid of their families.

Off now for a drink atop the Rex Hotel, another hangout of Western journalists. 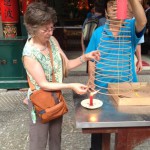