Written by Classical Pursuits on Sep 14, 2011 in Ann's Musings, Journal, On the Road with Ann, Today in Literature, Travel Pursuits

A true confession: When I am intent on something, I can be more dogged than any canine wth a bone.

One of the books we will be discussing in India this coming February/March (Confounded & Bewitched: The Strange Rise of Modern India) is a  personal favouite, Midnight’s Children by Salman Rushdie. I learned the extraordinary Canadian filmmaker Deepa Mehta recently completed shooting  a film of the book, with the screenplay written by Rushdie himself. I became wildly excited when I discovered both of them would be at TIFF (the Toronto International Film Festival), talking about their collaboration and screening some rough cuts. I was determined to go!

Full of confidence and determination, I arrived at the box office at 5:30am on the day single tickets were to become available. Alas, alack, I found myself at the end of a very long queue that had been forming since the previous afternoon. But I sat on the floor and quietly read my book. By 11am, I was still an estimated two hours from being served. But when the computer system crashed and there was no movement, I limped away with my tail between my legs, discouraged.

But I was not ready to acknowledge defeat. Monday morning, two friends, Riva Horowitz and Victor Levin, seemed happy enough to join me on the lineup for rush seats. We amiably passed several hours in the sunshine, people watching and chatting with others in line. In front of us was a handsome young film fanatic from Oman, here just for the festival. The TIFF staffer, whose job it was to keep us informed of our prospects, was one of those intrepid Australians who set off alone with a one way ticket, not knowing where they will land or when they will return. And then, WE WERE IN! 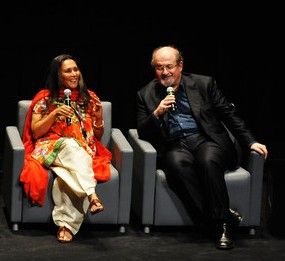 A warm affection and deep respect between Mehta and Rushdie was plain to see from their easy exchange. Rushdie made clear that he had total trust in the directorial decisions Mehta made in translating his long book into two-hour feature film.  He knew she would know how to preserve its essential epic and personal qualities. Mehta said she considered Midnight’s Children Salman Rushdie’s  love letter to India. The rough cuts we saw were beautifully evocative. But I am glad that the film will not be released until next October, seven months after our return from India. I  very much want to see it, but not until I have had a chance to reread the book and discuss it with others “on location.” I want to form my own impressions of the characters and the place and the mood first. Then I will be eager to invite Deepa Mehta to join the conversation.

Riva and I enjoyed an unfashionably early Indian dinner (at a table where Francis Ford Copola had dined the night before). The food, the decor, the pleasant conversation with the staff, all added to whet my appetite to actaully experience India up close and personal. Reading, eating, watching films, and talking to people from India can take you only so far. I know will awaken all my senses and sensibility in unimaginably new ways. I can’t wait. Confounded and Bewitched: The Strange Rise of Modern India.

I don’t anticipate any more bones for a while, but I am glad I kept a hold of this one.