ON THE ROAD WITH ANN – Who said, “A picture is worth a thousand words”?

Written by Classical Pursuits on Apr 30, 2012 in Journal, On the Road with Ann, Travel Pursuits

I don’t know about you, but I was surprised to find that that commonplace expression originates with Napoleon Bonaparte. It refers to the notion that a complex idea can be conveyed with just a single still image. It also aptly characterizes one of the main goals of visualization, namely making it possible to absorb large amounts of data quickly.

But that idea is behind our trip photo contest. Here are the winners from the two most recent trips, Confounded & Bewitched: The Strange Rise of Modern India and Mystery & Manners in Savannah: Selected works of Flannery O’Connor.

Congratulations to the winners and warm thanks to all those who made submissions.

It was difficult for the judges to select a winning image from the trip to India, both because there were so many fabulous photos submitted by many people and because the country is so rich that it is almost impossible to take a bad photo.

We have therefore settled on a single first, second and third prize plus three honourable mentions. They are all fabulous photos and it was not easy for the judges to decide.

For Mystery & Manners in Savannah, the judges chose this image submitted by Christine Croucher. This image needs a little background. It is a barn on the property of Andalusia, the farm where Flannery O’Connor spent her final years and the setting for the final scene of “Good Country People.” Here is an excerpt from the text leading up to the entry into the barn. You can read the entire story here.

“Ain’t there somewheres we can sit down sometime?” he murmured, his voice softening toward the end of the sentence.

“In that barn” she said.

They made for it rapidly as if it might slide away like a train. It was a large two-story barn, cool and dark inside. the boy pointed up the ladder that led into the loft and said, “It’s too bad we can’t go up there.”

The girl gave him a contemptuous look and putting both hands on the ladder, she climbed it while he stood below, apparently awestruck. She pulled herself expertly through the opening and then looked down at him and said, “Well, come on if you’re coming,” and he began to climb the ladder, awkwardly bringing the suitcase with him. 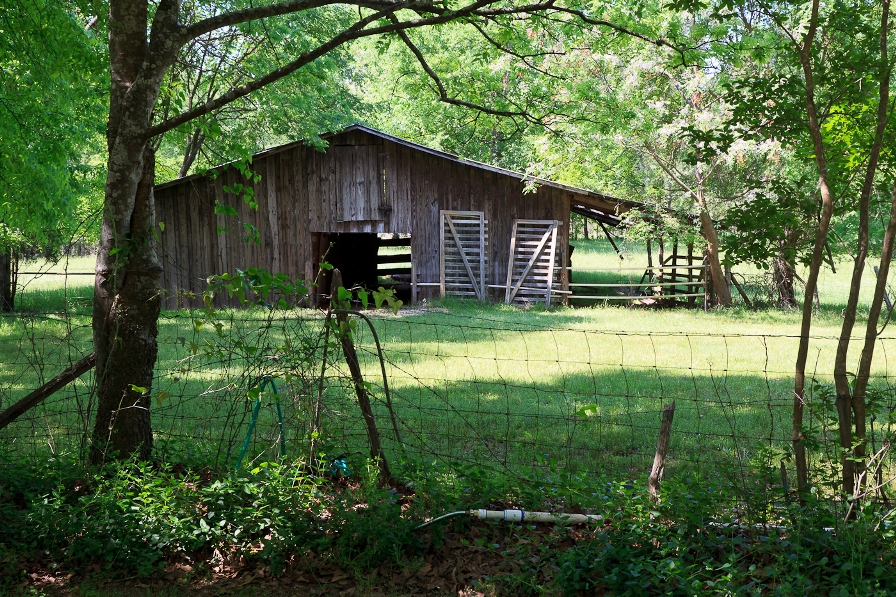