As grandly epic as Homer, compellingly human as Shakespeare, and psychologically keen as Chekhov—the sagas of Icelanders rank among the world’s greatest literary treasures. With economy of style and astute insight into character, they portray poets, warriors, statesmen, and outlaws—strong and determined men and women who strive for power, wealth, fame, and love in a frontier society that wavers between the rule of law and vengeance.

Duration: 2 1/4 hours per session, with a short break mid-session.

How: We will be using Zoom; you will receive instructions on how to join upon registration. For your privacy, all our Zoom seminars are password-protected and are never recorded.

All seminar payments are nonrefundable. If you are interested in applying your Toronto Pursuits 2020 deposit to this seminar, please contact us.

Mark Cwik is the education manager for Classical Pursuits. He is a longtime Classical Pursuits seminar and trip leader and has been leading seminar discussions with adults for 25 years. He specializes in literature from the ancient, mythic and religious world, with recent online seminars on Homer’s Iliad and Odyssey, Vergil’s Aeneid, the Book of Genesis, and the Epic of Gilgamesh. Mark has led two Classical Pursuits trips to Iceland and can never get there often enough.

Please be sure to obtain this edition.

We encourage you to support local bookstores or other independent sellers, especially as alternatives to Amazon.

In the US and the UK, try Bookshop.org, World of Books, or Ebooks (electronic books only)

In the US and Canada, try Powell’s Books, IndieBound, and Thiftbooks (used books only in Canada)

As grandly epic as Homer, rich in tragedy as Sophocles, compellingly human as Shakespeare, and psychologically keen as Chekhov—the sagas of Icelanders are the crowning achievement of medieval Scandinavian narrative and rank among the world’s greatest literary treasures. They describe a world of a millennium ago that nevertheless rings familiar with perennial human struggles.

The forty-plus narratives of adventure and conflict that comprise the sagas are set in Iceland’s 9th- and 10th-century Age of Settlement, when a handful of families fled the oppressive kingship of Norway to set up new lives on an island in the middle of the Atlantic. It was in Iceland the era of a unique commonwealth of free chieftains with no king, clerical 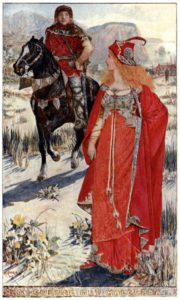 hierarchy, or armies, ruled by Viking traditions of honour and blood vengeance. Written down anonymously several hundred years later, the sagas look back on a pioneer generation struggling to forge and maintain a self-governing community in a harsh environment at the edge of the known world.

With economy of style and astute insight into character, the sagas portray poets, warriors, statesmen, farmers, and outlaws—strong and determined men and women who strive for power, wealth, fame, respect, and love in a frontier society that wavers between the rule of law and vengeance.
In this seminar we will first look closely at two of the short sagas, to become familiar with the unique literary style and the cultural background of these great tales. We’ll then lauch into the grand, multi-generational Laxdaela Saga, and finish the seminar with one of the gems of the saga tradition: the story of the wily, Odyssean poet-warrior hero of Egil’s Saga.

“With law shall our land be settled, and with lawlessness wasted.”      – Njal’s Saga

All online seminar payments are nonrefundable.