Conflict and Compromise: Hammering Out a Republic in Philadelphia

We. It’s a bold one-word assertion that gave legal birth to a nation. “We the People of the United States.” How did we get to this we? Tensions based on region, race and religion threatened hopes for “a more perfect union.” The delegates of the Constitutional Convention themselves were far from agreeing on the purpose and form of government. “We” excluded many voices: women, enslaved and free African-Americans, native peoples and religious minorities. Yet somehow, conflicts were (mostly) resolved, compromises reached and 13 independent states united into a single nation. That “somehow,” the process of hammering out a republic, will be the focus of our time in history-rich Philadelphia.

Guided visits to Independence Hall and the National Constitution Center will bring the summer of 1787 to life. We’ll stand in the room where delegates, sweltering behind doors and windows closed for secrecy, argued, debated, passed motions, found points of agreement and ultimately signed the Constitution. A walking tour will take us through the bustling Georgian streets of the colonial city where Benjamin Franklin had his printing press and Betsy Ross her upholstery shop. There will also be informal opportunities to soak in the atmosphere, such as during lunch at the reconstructed City Tavern, the official “local” of the delegates.

We’ll close our trip with visits to two famous Philadelphia landmarks. The imposing Eastern State Penitentiary, conceived by Franklin, was an early enforcer of solitary confinement—a treatment thought to encourage rehabilitation. The expansive grounds of Bartram’s Garden, the oldest botanical garden in North America, offer a much pleasanter sort of solitude. We’ll learn about the garden’s history and enjoy the brilliant colours of sugar maples, black gums and viburnums.

Our home will be the historic Penn’s View Hotel. Here we’ll gather for discussions and presentations. We’ll share our understanding of the accomplishments and failures of the 1770s and 1780s and the of the post-convention debates where so much was at stake: “large- vs. small-scale polities, complexity vs. simplicity, heterogeneity vs. homogeneity, novelty vs. tradition, individual vs. collective liberty, and whether government power and personal liberty are in zero-sum relationship to each other.”

For more information, see our detailed itinerary. All Travel Pursuits operate under the umbrella of our partner, Worldwide Quest (TICO Reg: #2667946). Worldwide Quest arranges the logistics for each trip to complement our literary theme. They handle all bookings/registration and are happy to book flights and help with pre- and post-trip arrangements. 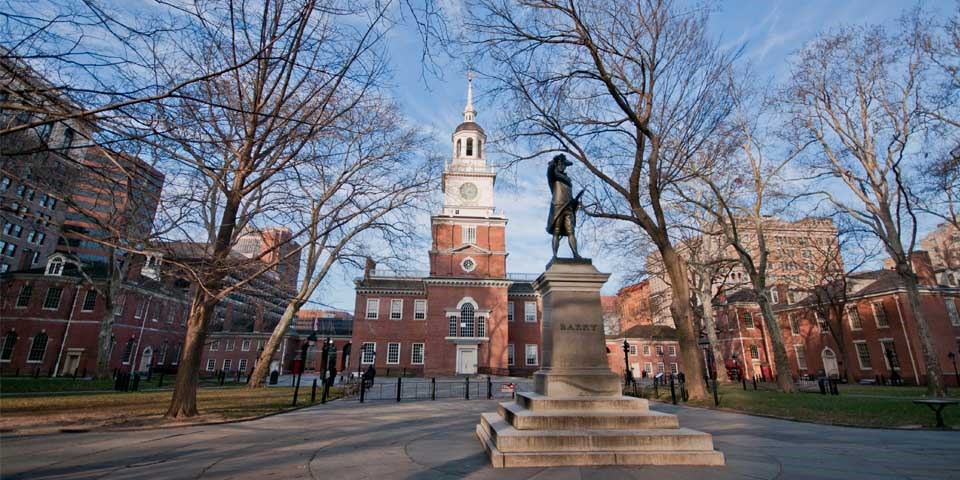 Readings
A selection of the nation’s foundational documents, along with works by voices often not heard in the process of creating the republic; these may include essays, private letters, diaries, news articles, etc.

Leader
Gary Schoepfel is a tutor at Harrison Middleton University, a former submarine sailor, a world traveller and retired VP of the Great Books Foundation. For Gary, “the rest of the story” is always a collection of history—bits that never made print, the other side, rumors and myths, partial truths and inconvenient facts. He can think of no better place than Philadelphia to see, hear and think about the rest of that story.