Heart and Soul: Nationalism in Music 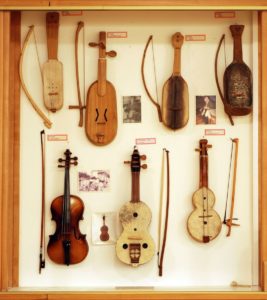 What distinguishes German music from French? Is there a uniquely Polish or American sound that’s immediately recognizable? The use of musical ideas that are identified with a certain country, region, community, or ethnicity, such as folk tunes and dances and their melodies, rhythms, and harmonies, has been practiced for centuries in subtle forms of expression.

But after the French Revolution, as European countries gained independence or came of age during the 19th century, their music, along with their history, heroes, and legends, became a crucial tool in developing a national identity and consciousness. Music reflected a nation’s culture, defined who its people were, and expressed a country’s distinctiveness—its very heart and soul. Chopin in Poland, Wagner in Germany, Dvořák in Bohemia and Tchaikovsky in Russia—composers wrote works that were seen to capture a nation’s spirit. The tradition continued well into the 20th century with Copland and Bernstein in the USA, Bartók in Hungary, Vaughan Williams in England, Shostakovich and Prokofiev in the USSR, and Sibelius in Finland.

his increased national pride did little to calm the strife that characterized European and transatlantic geopolitics, as a stronger sense of community often led to a “we’re better than you” approach. Is there nationalism in music today? Will attitudes change as physical distances are an ever-shrinking barrier to sharing and accessing different cultures? Or, if music is the universal language—a major question in itself—does it transcend nationalism and community? Is it possible to create a music that obliterates the distinctions of music nationalism, or does nationalism itself create universality? By listening to a variety of recordings, we will explore the concept of music nationalism throughout history, seeking insights into the power of music to both divide and unite.

“The art of music above all other arts
is the expression of the soul of a nation.”

Leader
Rick Phillips spent 30 years in the Music Dept. of CBC Radio, 14 of them as the host and producer of SOUND ADVICE, the weekly guide to classical music and recordings heard across Canada. Now he’s a busy writer, reviewer, teacher, speaker, music tour host, and frequent seminar leader at Toronto Pursuits. Rick has always been interested in the universality of music, often expressed through national styles and traits. Music is universal because it is national.

Music
We will listen to music by a variety of 19th- and 20th-century composers. No advance listening is required.