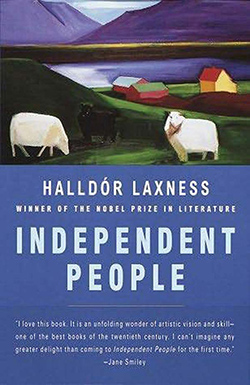 A bleak landscape, cold weather, a stubborn sheep farmer and lots of sheep might not seem like the stuff of great literature, but Iceland’s Halldór Laxness (1902 – 1998) made of them a masterpiece.

Independent People tells the story of the proud and obstinate sheep farmer Bjartur of Summerhouses. After 18 years in service to the local bailiff, Bjartur has finally saved enough money to start his own farm. Bjartur’s new home is little more than a turf hovel; to Bjartur, it is a castle – because it is his.

Bjartur is a man harsh as the Icelandic landscape, possessed by a fierce determination to live free of debt to man or God. His brutal and ferocious drive for self-sufficiency is at odds with a way of life and an unyielding climate where interdependence is the only means of survival. Wives, children, and friends fall victim to Bjardur’s ruthless obsession.

The joy of Laxness’ novel is that this cheerless tale runs rich with warmth and sly humor. Never flinching from the cruel austerity of his protagonist, Laxness crafts a poetic, deeply felt, and moving epic on the scale of a Melville or Cervantes.

Independent People secured for Laxness the1955 Nobel Prize for Literature and established him as the undisputed master of modern Icelandic fiction. Published in Icelandic in 1935, it was first translated to English in 1946 but was out of print and unknown to most English-speaking readers for almost the next half-century. Much like Iceland itself, only in recent years have the grandeur and beauty of Independent People been rediscovered by the outside world.

Leader
Mark Cwik is a long-time discussion leader in Chicago whose previous courses at Toronto Pursuits have included the Iliad, The Histories of Herodotus, Democracy in America, Moby Dick, and the Five Books of Moses. Iceland and big books are high on his list of favorite things.

Book
Participants are required to obtain the specified editions in order to facilitate the group’s ability to find and cite portions of the text during discussion.