LITERARY CUBA: What Now? What Next? A Country in Transition

Whether you are a Canadian who has enjoyed a Cuban beach holiday or an American who has looked with longing at that alluring but, until very recently, off-limits island only 90 miles off the coast of Florida, we promise you a behind-the-scenes immersion into a neighbouring culture that both confounds and intrigues us.

We will explore what it was like to grow up in Cuba as the last generation of citizens raised with Fidel Castro in charge of their country, and how ordinary Cubans perceive themselves and their future. On a positive note, violent crime is low, literacy high, and healthcare universal. However, the one-party state has imposed limitations on many freedoms, including expression and travel. And the fall of the Soviet Union brought an end to the subsidies that kept the Cuban economy afloat until the nineties, causing the country severe economic hardships with which it is still grappling. 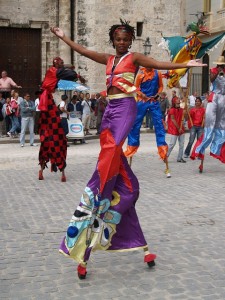 As we get to know Cuba we’ll build relationships with Cubans from all walks of life in the places they live, work, worship, and play. We’ll soak up the environment of colonial, art deco, and contemporary architecture and savour the country’s hugely popular and influential music. We will meet local artists. And we’ll discuss Cuban poetry and literature with some of the island’s most articulate writers.

We’ll experience Cuba in three distinct locations. Havana, of course, the big and beautiful capital. Trinidad, a perfectly preserved Spanish colonial town located on the Caribbean coast near the Escambray Mountains. And the small city of Cienfuegos, declared by UNESCO to be the best extant example of the 19th-century Spanish Enlightenment implementation in urban planning. Our accommodation is selected to enhance each location, from a grand Old Havana hotel to a charming lodge in Trinidad.

This Travel Pursuit is filled with intimate experiences: meeting with artists, writers, and the people who are moving the country to a new place. Note that the first trip, April 2 to 13, is SOLD OUT. We are running a second trip April 13 to 24.

Readings
Explosion in a Cathedral, by Alejo Carpentier and Cuban Revelations, by Marc Frank

Leader
Ann Kirkland is the founder of Toronto’s famed “summer camp for enquiring adults,” Toronto Pursuits. She also leads literary adventures around the world, breathing life into literature and art and taking readers beyond the surface to understand both the people and the culture.