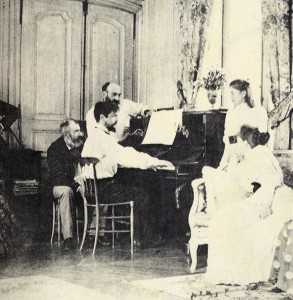 Linked to the late 19th century French movement in painting by the likes of Monet, Cézanne and Renoir, and the symbolist poetry by Mallarmé and Verlaine, musical Impressionism attempted to create a new, more subtle form of music, more hinted or suggestive than stated. Employing new influences and borrowing from other cultures, including Asian, the goal was to appeal more to the senses than the mind. More important than the subject itself, was the feeling or “impression” that the subject aroused in us. In this seminar, we’ll deal mainly, but not exclusively, with the musical masterworks of Claude Debussy and Maurice Ravel. I love Impressionism in music because the trend was so different from the mainstream Austro-German fare, by the likes of Beethoven or Brahms. Subtle, understated, nuanced, refined and very “French,” it’s music that is as intangible as the changing light of day.

No reading or listening required. Just come with an open mind and ears!

“Listen to no one’s advice except that of the wind in the trees. That can recount the whole history of mankind …”

Leader
Rick Phillips has been a popular seminar leader with Classical Pursuits for many years. Rick hosted and produced Sound Advise, the weekly guide to classical music and recordings, heard across Canada on CBC Radio every weekend. As well as broadcasting and webcasting, he is also a busy freelance writer and reviewer, lecturer, panel moderator, consultant, musical tour guide, artistic director and concert host.