07. Taste of an Indian Classic: A Telling of the Mahabharata 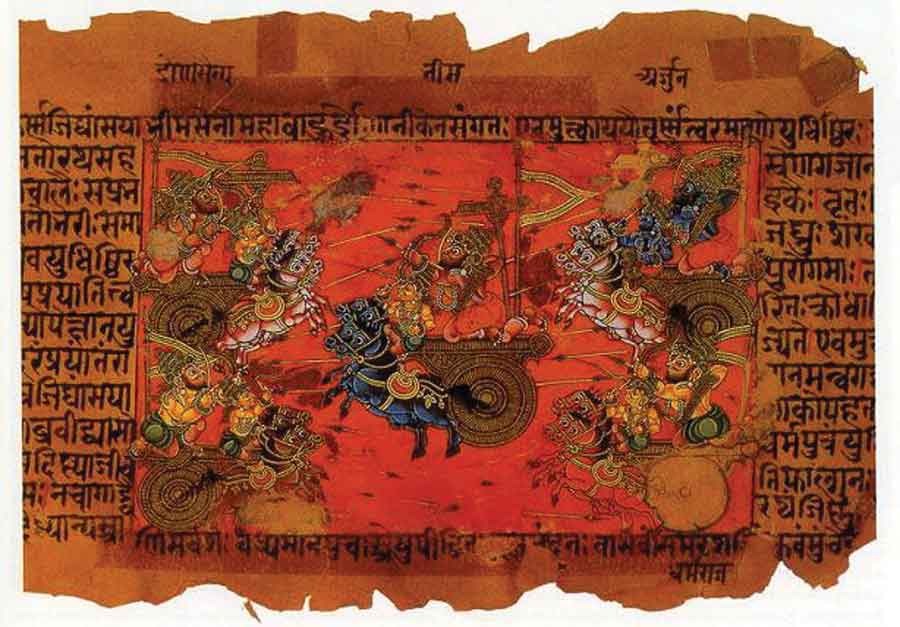 History and philosophy blend in this classic Indian tale of war between rival dynasties, of moral dilemmas and intervening gods. Each warrior must contend with his moral duty, his dharma, and contemplate the effect of his heroic yet violent actions on his karma. Not content to leave these mortals to their own devices, gods both good and evil descend to earth to deliver wisdom, wield influence, and even join the fray.

Composed between 200 BCE and 200 CE, the Mahabharata is the longest Sanskrit epic ever written. William Buck’s goal in this retelling was to “preserve the spirit and flavor of the original.” His approachable version offers the full span of a cosmic confrontation caused not by the external forces typically blamed in Western sagas of conquest, but by violations of moral law.

Through Shared Inquiry discussion we will explore this exotic, action-packed story, one that will remain relevant as long as we struggle to do what is right according to our dharma.

An optional viewing of Peter Brook’s beautiful multi-part retelling in film will also be offered in the afternoons.

“The true battlefield is where no warriors or arrows are needed. It is inside each one of us where each man must fight alone.”

Co-leaders
Denise Ahlquist, Vice President for Training at the Great Books Foundation, has led many thousands of Shared Inquiry discussions and is fascinated by the influence of ancient India on today’s world.

Alice Dunlap-Kraft will be newly retired in 2014 from nearly 30 years as a management consultant at IBM, relishing her freedom to read, and banishing the corporate cobwebs by thinking about the deeper matters of life.

Books
Participants are required to obtain the specified editions in order to facilitate the group’s ability to find and cite portions of the text during discussion.

An earlier edition with the same content and pagination is also available and can be used for this seminar.
ISBN-13: 9780520227040