The Beethoven Symphonies: Aging or Ageless? 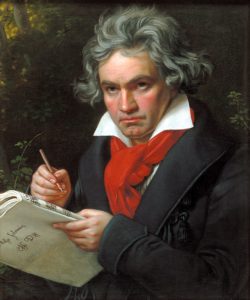 COVID-19 update: We hope to hold Toronto Pursuits in July 2021 but are not formally opening registration yet. We will be updating our product pages as we have more information from the University of Toronto and the City of Toronto on indoor gatherings, and from the Canadian and US governments on border and travel updates. We do have a variety of online seminars running now, with new groups starting almost weekly. Thank you for your support!

The nine symphonies by Beethoven are the most famous and frequently-performed symphonies ever composed, and they are often likened to other masterpieces in the world of art, like the plays of Shakespeare, the paintings of Rembrandt or the sculpture of Michelangelo. But how well do you really know them?

Beethoven was a child of the French Revolution, steeped in the ideals of liberty, equality and fraternity, and his symphonies illustrate and reflect these sociopolitical concepts that were sweeping Europe as the Romantic Age burgeoned. He wrote them over a period of about 25 years in the early decades of the 19th century. What makes them so loved and revered, and what can they communicate to us today, 200 years later? How and why did his conception of the symphony evolve as he grew older and his world changed around him? What were the influences on Beethoven, and how did his symphonies influence those who came after him?

In this seminar, using a variety of legendary recordings by top orchestras and conductors, we will delve into these nine musical masterpieces to uncover Beethoven’s powerful skills and methods of communication and expression. You do not need to read or write music to participate in and enjoy this seminar.

“Don’t only practice your art, but force your way into its secrets, for it and knowledge can raise men to the divine.”

Leader
Rick Phillips spent 30 years in the Music Dept. of CBC Radio, 14 of them as the host and producer of SOUND ADVICE, the weekly guide to classical music and recordings heard across Canada. Now he’s a busy writer, reviewer, speaker, teacher, music tour host and seminar leader at Toronto Pursuits. Rick has long loved the nine symphonies by Beethoven—how they capture Beethoven’s pivotal period in history and how they are still powerfully valid today.

Books and Music
No advance reading or listening is required; but Rick encourages you to read any biography of Beethoven.