04. The Prophet and the Poet: Reciting God 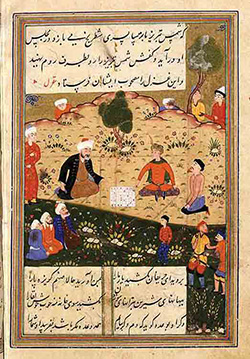 Regardless of sectarian differences, for all followers of Islam – 23 percent of the world’s population in 2012 – the Qur’an is primary and central, its words considered a direct recitation by God to the prophet Muhammed. And yet, to non-Muslims its contents are on the whole little known. One of the traditions that grew out of the teachings of the Qur’an was the Sufi sect, whose major exponent was the 13th-century Iranian poet, Rumi. Rumi’s greatest work, the Ma’navi, is sometimes called the Qur’an in Persian. A rich collection of stories and lessons in verse, Rumi’s recitations, dictated to his followers, are considered by many Muslims to be divinely inspired.

“If spiritual explanation were enough
Creation of the world were all in vain.”

Leader
Donald Whitfield is Director of Great Books Discussions, the adult education division of the Great Books Foundation in Chicago. Starting from his love of the poetry of Rumi, he wants to explore the tradition of the Qur’an out of which it grew.

Available on both amazon.com and amazon.ca.