“Who’s he when he’s at home?”: James Joyce’s Ulysses 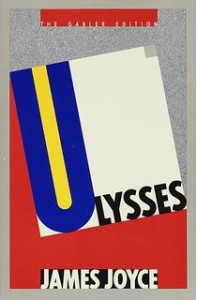 “O, rocks!” Molly Bloom complains to her husband Leopold as he tries to define a difficult word she has encountered in a novel. “Tell us in plain words.” He explains that “metempsychosis” can mean “reincarnation,” being reborn in another body. As he offers an example, he lets metempsychosis blend into metamorphosis, saying that the Greeks believed people could be changed into animals or trees.

Joyce wasn’t particular about the concept—he never used either “metempsychosis” or “metamorphosis” except in his characters’ conversation. Whether Homer’s Odysseus, Penelope, and Telemachus are reborn or changed into Leopold Bloom, Molly Bloom, and Stephen Dedalus, though, Ulysses stands as one of the most famous attempts to re-imagine ancient characters in a modern context.

In this seminar we will look at Ulysses in detail as we work to bring the novel alive.

Joyce told a friend that he used Odysseus as a model because Homer’s hero was a complete, all-around character. As Molly shows her husband the word “metempsychosis,” she asks, “Who’s he when he’s at home?” We will follow Leopold Bloom, Joyce’s modern Ulysses, walking around Dublin all day on June 16, 1904, before finally returning home, and in doing this we will explore who he is and what he might mean in Joyce’s daring excursion into early 20th-century life.

Read more in my guest blog post, Feeling at Home with Ulysses.

Leader
Michael Groden is the author of "Ulysses" in Progress, "Ulysses" in Focus, and a just-finished memoir about spending a life with Ulysses. He was Distinguished University Professor of English at the University of Western Ontario until he retired in 2014. For the past 15 years he has guided adults through Ulysses in both New York and Toronto.

Book
Participants are required to obtain the specified editions in order to facilitate the group’s ability to find and cite portions of the text during discussion.