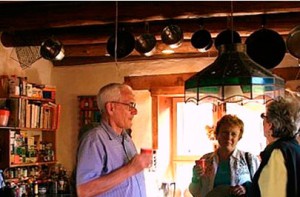 I have circumnavigated the world twice by ship, made my way around the perimeter of South America by plane; driven to Alaska on the Alcan Highway when it was mostly gumbo; explored France and Spain in a 8000-mile auto trip without making a single reservation; motored a dozen times across the United States (also without making reservations ahead); but I had never taken a single organized tour or vacation—until three years ago.

I like freedom, flexibility and serendipity far too much to subject myself to rigid schedules, which I felt were the distinguishing characteristics of the usual planned tours and trips. Then Classical Pursuits was brought to my attention.

Good food, good reading, good company and lots of free time in which serendipitous things can happen seem to be the hallmarks of Classical Pursuits learning vacations. At least this has been my experience on two programs to date, Vive Québec!, in 2004, and The American Southwest: The Power of Place, this past September, 2007.

To give just one example of the serendipitous from the Québec City experience: Québec City is a wonderful place for walking, and we had several guided tours, but on one of our own unguided walking tours, we stopped for lunch at a delightful outdoor restaurant where a quartet suddenly appeared and played throughout the lunch hour. We could not have planned it better.

More about the Québec experience another time perhaps, but I want to focus here on the American Southwest, and specifically Santa Fe, where 20 of us, from Toronto, Kansas City, Seattle, Ottawa, Pittsburgh and several other towns and cities of the North American continent, came together for a week of discussions, excursions and, not least, outstanding food and wine.

We stayed at the Guadalupe Inn, a charming bed and breakfast in an historic part of Santa Fe, run by two sisters, Dolores and Henrietta Quintana. One morning at breakfast we had the opportunity to talk with their 94-year-old mother, Abuela Quintana, about her life growing up in old Santa Fe. Another morning, Henrietta spoke movingly about her many years teaching deaf children. The Inn felt like home very quickly.

The Classical Pursuits experience is centered on readings designed to get one quickly into the essence of a culture and place—the history, people, geography and topography, social and economic characteristics, all those things which make a culture unique, but which also reveal those things it shares with the rest of the human species. And Classical Pursuits firmly believes that there is no quicker or more interesting way than through good literature—I agree. 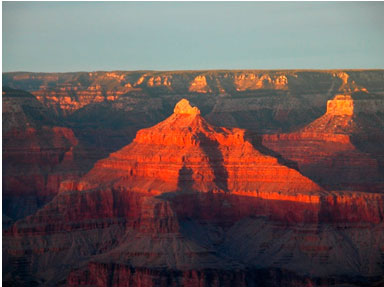 For that reason, some of us questioned the choice of Wallace Stegner’s novel, Angle of Repose, for the principal reading of the Santa Fe program. It takes place in New England, Idaho, Wyoming, San Francisco, Mexico—anywhere but New Mexico. It is a very fine novel, but we thought perhaps Willa Cather’s Death Comes for the Archbishop might be more appropriate. Yet we quickly came to realize that Stegner’s novel was an excellent choice in the way it tied the past and present of the American West together and allowed us to see how it became what it is. The excursions and the people we met, then, would bring the Southwest into focus and allow us to place it in the larger context of the West in general.

The discussions, lead by Hans Von Briesen, a member of the St. John’s College faculty in Santa Fe, were truly a highlight of the experience. I found that many of the other participants had done very careful reading and were constantly pointing out things that had escaped me. As a retired literature teacher, I felt properly humbled. But I learned a great deal and realized once again what an immense difference it makes to be able to discuss one’s reading in this way. The discussions also served the purpose of allowing us get to know one another, contributing enormously to the camaraderie which developed over the week we were together. 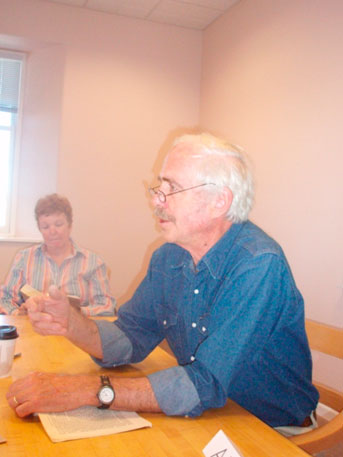 The excursions helped to put us in touch with the local and the unique—the power of place. These included a visit one day to the Bandelier National Monument, the Frijoles Canyon cliff dwellings and the Tyuonyi pueblo ruins. Our guide on this and other excursions was Kay Lewis, a fourth-generation New Mexican with seemingly boundless knowledge of the Santa Fe area. Another day, we visited the Georgia O’Keeffe Museum, where we feasted on this extraordinary artist’s paintings and an excellent lunch.

On yet another day we made a visit to a garlic farm dzeveloped by Stanley and Rose Mary Crawford, who escaped urban living in San Francisco 30-odd years ago to build an adobe house with their own hands and brave the challenge of farming and raising a family in the arid New Mexico countryside. Stan has published several books relating his experiences during those years, including the problems he encountered as the elected overseer (Mayordomo) of the distribution of water from the acequia, or irrigation ditch, that serves the area. (It was startling to reflect on the fact that the word acequia is from the Arabic, carried from Spain by the conquistadores, who knew the extraordinary irrigation systems built by the Moors during their 700-year occupation of medieval Spain–thus do basic things endure.) 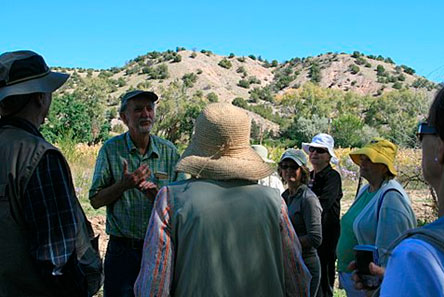 Stanley Crawford on the property of his garlic farm in Dixon, NM

Later that day, after a boxed lunch at the farm, we took the High Road to the little Spanish village of Chimayó, to be met by Don Usner, a writer and photographer whose Hispanic family roots go well back into New Mexican history. He took us to his family’s ancestral home, now a museum-in-progress. 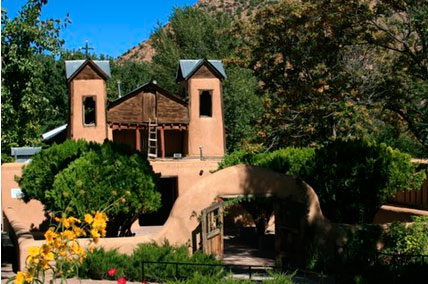 Following that he accompanied us to see the superb weavings of the Trujillo family (with a demonstration of their craft on an enormous historic loom, one of several still in operation in their shop, Centinela Weavers). There I bought a multi-colored pillow that bears witness on my study couch to the fact that I wasn’t imagining all of this. 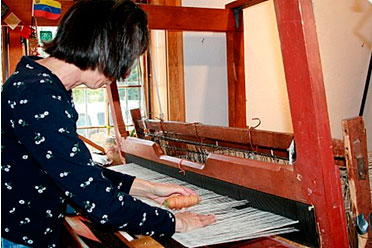 Lisa Trujillo at the loom

A final excursion ended this splendid week with a visit to the Rancho de las Golondrinas. The Ranch of the Swallows is a Southwestern version of the experience one gets at, say, Sturbridge, Massachusetts, or Williamsburg, Virginia, where colonial life is re-enacted with costumed “villagers” performing the typical tasks, and living in the typical dwellings, of the period. It sounds a bit hokey, and in some ways it is, but there may be no better way to get an idea of life in an era so different from ours that it is otherwise hard to imagine. 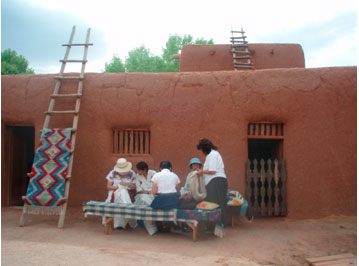 Barbara Zabel of Ottawa with the fourth, or was it the fifth,
glass of wine at the Chile & Wine Fiesta

That excursion ending with a wonderful wine-tasting lunch, part of the Santa Fe Wine and Chile Fiesta. Under a huge awning at the Rancho we were served superb food and tasted some Spanish wines imported for the occasion. Also imported with the wine were three young Spaniards, representatives of their respective wineries back home, who were delighted to spend some of the lunch hour talking to yours truly in Spanish—I detected just a bit of homesickness, mixed with typical Spanish brío.

I haven’t talked specifically about all the great eating experiences we had, some as part of the program, some on our own. But I’ve referred to food often enough to make it clear that it looms large in my life. Rest assured that Santa Fe, not to mention Québec City, does not need to take a back seat to any place I know with regard to cuisine. I suspect, knowing Ann Kirkland, the director of Classical Pursuits, that food will always be an important part of any Classical Pursuits experience.

What’s next on the agenda for me? I am seriously considering Classical Pursuits’ program in Galicia for June, 2008. It is one of my favourite regions (growing up in Seattle may make me partial to the rain and fog of this part of Spain—yes, Spain!), and I can vouch for the excellence of Galician food and wine, especially seafood…