ON THE ROAD WITH ANN IN CUBA—You say you want a revolution?

Written by Ann on May 11, 2016 in Convivium, On the Road with Ann, Uncategorized

“Well, you know, we all want to change the world …”

It was not the Beatles but the Rolling Stones at the centre of a mammoth street party in Cuba just before we arrived. Still, I could not help using the Beatles’ lens during my stay of nearly a month with two consecutive Classical Pursuits trips, Literary Cuba: What Now? What Next? A Country in Transition.

Since my impressions are simply that, based on what we saw, heard, and read, I will group my reflections based on chronology.

The Architecture Is Astounding

The port city of Havana is a treasure of Spanish colonial, Belle Epoque, and Mafia Moderne.  Much of it is crumbling, but the overall impression is spectacular, what a curator from the Metropolitan Museum of Art called “a tropical St. Petersburg.” Photographs cannot capture the collective impact of individual buildings, elements of the city plan, and the stunning seaside location.

The architecture in Cienfuegos and Trinidad, the other two places we visited, is different but impressive in its own ways.

As one local preservationist said, Cubans realize that magnificent architecture, particularly in Havana, is “our golden egg.” Money may be the biggest challenge, but there is also much concern about how to avoid the pitfalls of urban renewal.

Cuban Life Is Vibrant, Even Flamboyant

Not everything is politics. Life is lived large. People are outside. They are colourful. They are active and engaged with one another.

Music is everywhere. And where there is music, people dance.

Being an island in the Caribbean determines a lot. People are isolated by geography and politics. They are proud and resilient. Blue skies, the sea, warm temps, abundant flowers and birds—the natural beauty of the place can’t help but create an atmosphere of exuberance and happiness. There are also hurricanes in Cuba.

One should not romanticize life in Cuba. Daily life is a grind. Getting around, finding food, running water, electricity, basic goods and services—all of these present continuing challenges for just about everyone. Cubans resort to the black market with regularity for staples and more. Subsidies for the essentials like housing and food are diminishing as the economy tries to find some middle way between orthodox communism and free-market capitalism. Health care and education are still free and remain the pride of the population. But doctors and teachers are abandoning their professions in favour of opportunities in the small but much more lucrative private sector economy (mainly tourism-related). Compounded with the greater ease with which Cuban exiles can send money to their relatives, economic disparity between the haves and have-nots is growing.

The Revolution Is Alive

But few would say it is well. Still, the Revolution is not dead. Everyone we met seemed cautiously optimistic that reforms are headed in the right direction under Raúl Castro. We heard over and over that Cubans cherish the egalitarian ideal and the sense of solidarity that emerged from the Revolution. In one generation the country eliminated illiteracy and radically improved the health status of the population. Now Cuba boasts First World statistics in health and education. The people who did not flee Cuba were, by and large, the urban poor and the peasants. The artists, writers, and professionals we met all came from humble origins and were fully aware that the educational opportunities they had enjoyed would not have been available to them under the former regime.

We heard little complaint about limits on freedom of expression. Hard to say if you don’t miss what you don’t know or if full frankness was not advisable. People felt free to talk about aspects of the Revolution they thought were in error, but mostly old violations had been remedied, and they believe that party leaders have the best interests of the citizens at heart.

The Artistic Impulse Is Alive and Getting Stronger

What is visible everywhere is the enormous artistic impulse throughout society. Although music is the art that is best known through export, the plastic arts, poetry and fiction, film and photography, and dance are thriving. 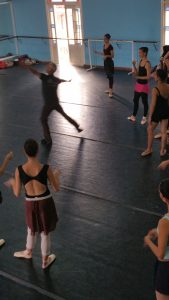 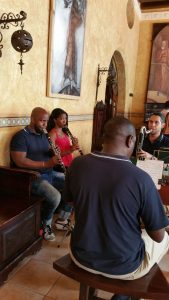 The quote is from “Words to the Intellectuals,” a speech Fidel Castro gave in 1961 to an audience of literary figures. This phrase became the benchmark of Cuba’s cultural policy regarding expressive freedoms. Since then, the mandate has proven to be elastic and flexible, sometimes loosening, sometimes tightening. It does seem that, under Raul, the concept of ‘loyal opposition’ has grown and the boundary between what is in and what is out is being pushed back.

The political right to speak freely seems to be an expected but unwelcome subject among artists and writers. Because officially recognized artists in today’s Cuba are part of an economic elite that earns money in hard currency, travels frequently, and owns property, I wonder if they may be less likely to complain about a lack of freedom.

The Dream Dictionary states, “If you dream about a revolution, this indicates a need or desire to change something that is not satisfactory to you or that seems to you to be unjust.”

The Cuban Revolution is 56 years old. Whether old injustices have been addressed and whether the “new” ruling order is satisfactory will depend, no doubt on where you stood, if old enough, before the Revolution, and where you stand now.

So much of what we heard while in Cuba was supportive and optimistic. So much of what we read from outside Cuba is critical and pessimistic. Whether insiders are speaking freely or are wearing blinders is really not for me to say. I can only close by saying that we met extraordinary people who seem to want to stay where they are.

No political system is perfect. What will remain is people, siempre la gente. Those we met were extraordinary in their warmth, hospitality, generosity, eagerness to share their art and ideas, and their pride in being Cuban. What I wish for Cubans is that it is their hopes and dreams that steer the ship through the rocky shoals of a brave new world that is upon them. More than once we heard the injunction that Cuba needs to have “one foot on the gas and the other on the brakes.”

I will end with a note received from Pat Yates of Washington DC along with her favourite photo.

“My favorite photo from Cuba. Trinidad, Monday, April 11, late afternoon, our last day before returning to Havana. While the more stalwart of our group tramped on through the heat and humidity uphill into the heart of the old city, Harriet, Oda and I lolled for awhile in the Plaza Major. We took the requisite pictures of each other, posing happily and perhaps a bit haughtily on beautiful wrought iron benches near the Cathedral. Nearby, a man and little girl – father and daughter, I assumed – were having a wonderful time blowing soap bubbles. Flashing through my mind was the thought that it was remarkable they had such a frivolous commodity, when necessary things like toothpaste and bath soap were so hard to find. But overriding that was my happiness at seeing a beautiful, ordinary moment of joy being shared by the little girl chasing the soap bubbles while the man blew them with great gusto. It seemed as that moment that we were all at one with the world.”