ON THE ROAD WITH ANN – Dubai’s Cultural Metamorphosis (Part 1)

Written by Ann on Mar 25, 2014 in Ann's Musings, Convivium, On the Road with Ann, Uncategorized

It has been a long and brutal winter in Toronto. So when I was invited to the Emirates Airline Festival of Literature in early March, I took only a few minutes to respond with an eager yes.

It’s not that I knew much about Dubai or had harboured a desire to visit. My vision, such as it was, could be summed up by this anonymous quote, “… an affluent bubble in a cloudless sky, confected in a few decades from desert subsistence into a futuristic city, hotels and high rises”. But being a curious cat, I wanted to see what this place was all about, how people felt about living there, and how books figured in their lives.

As with everywhere I’ve travelled, I found was a place of far more complexity, texture, and nuance than I had anticipated. Wherever you find people, you find vast diversity. As expected, Dubai dazzles and confuses with its curious combination of Muslim and tribal traditions mixed with capitalism on steroids. But what surprised me most from my short stay was the cultural and cosmopolitan vibrancy that can only be found in a young and optimistic society. Apart from the glam and glitz of over-the-top malls and walls of impossibly tall and narrow skyscrapers reaching up from the desert, this city is making big business of the arts and seemingly doing so with energy, excitement and a refreshing lack of cynicism.

Thanks to my friend Francis McGovern, founder of Literary Traveler, I joined a small group of journalists covering the festival and Dubai at large.

My impressions of Dubai later. First, the festival. 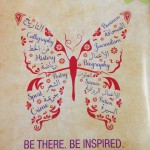 This was the 6th annual Emirates Airlines Festival of Literature. The 2014 Festival’s main theme is Metamorphosis, one of the great themes of storytelling from the earliest days of the written word through to the present. The Festival is now part of the Emirates Literature Foundation, which was established last year by Royal decree, but attention must be paid to Isobel Abulhoul. The festival is her brainchild, and it is hard to imagine its continuance without her tireless, thoughtful, and gracious oversight.

Isobel Abuhoul is a force of nature, a larger-than-life expat Brit with a lifetime passion for reading. Isobel came to Dubai in 1968 after meeting Abdulla Abulhoul the man she would marry, when they were both students at Cambridge. She and Abdulla co-founded Al Ittihad School (ittihad means “unity”) because they wanted their five children to have an education that combined the best of British and Arabic traditions. Isobel started Magrudy’s in 1975 as a shop that sold educational toys and children’s books. Now there are multiple branches and books for all ages in both Arabic and English. She founded the literary festival in 2008 after a casual conversation over a ladies’ lunch. The festival clearly reflects her values:

“I want the festival to be as open and accessible to everyone as possible. We shouldn’t be keepers of taste, and I am a great believer that any reading is good for you, so unusually for a literature festival I see as us as a festival for non-readers rather than avid readers, because I want us to encourage people pick up a book for pleasure.”

Thirty thousand people, young and old and from all different backgrounds, together with authors came over five days in early March. There were special sessions for children, a Female Focus strand, literary lunches, and writing master classes. Sessions were simultaneously translated from Arabic or English or vice versa. Casual conversations across boundaries were easy and common. The atmosphere at the InterContinental Hotel Festival City was more carnival than conference. 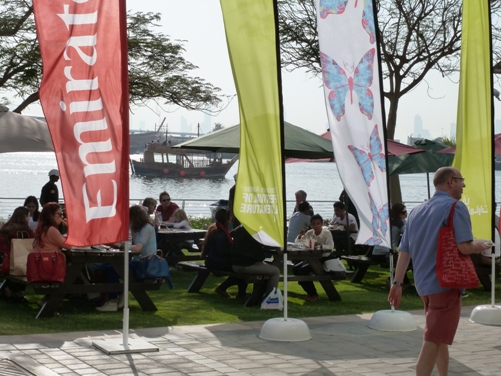 Here were some highlights for me:

Some enchanted evening brought together music, poetry and traditional Arab dining beneath the black desert sky punctuated with a bright crescent moon. We were transported in dune buggies to a desert camp where I shed my shoes and satisfied all my senses – fine sand, still warm, underfoot, the haunting music of a lone oud player, the dark sky, and convivial company over wonderful food while sitting on carpeted cushions at a low table. And there were the featured performances from some of the world’s most prestigious poets, including the UAE’s Khalid Al Budoor and Khulood Al Mu’alla, Germany’s Frank Klötgen and the UK’s Andrew Motion and Lemn Sissay. As Lemn Sissay said: “Poetry! Camels! Deserts! – at no other time will I be able to say that in a single sentence!” 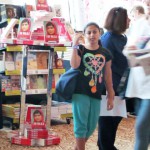 The story of Malala Yousafzai may be well known, but foreign correspondent Christina Lamb gave a fascinating account of how she managed to retain the voice of the young global icon while co-authoring I Am Malala. Lamb visited the SWAT valley and stayed with Malala’s cousins in her parents’ village and with the Yousafzai family in England. We were treated to a guest video appearance from Malala herself, explaining she could not come to Dubai because the festival coincided with her school exams. One fun fact we learned is that Malala’s favourite subject in school is physics. She is apparently not a very good physics student, but she is drawn to the dispassionate order it embodies. I don’t think there was a dry eye in the room, so moved were we by this courageous girl and so outraged that girls are still being barred from school. I bought the book for my granddaughter, who is 11, the same age Malala was when she was shot by the Taliban on her way home from school. Read more.

Children of all ages and cultural backgrounds were everywhere. Many sessions were oriented toward their particular interests. Others were focused on writing for children. It was especially thrilling to see kids who couldn’t wait to peel off on their own with a newly acquired book. 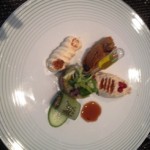 There were also a murder mystery dinner; the annual George Orwell Lecture, given this year by the BBC’s Middle East editor, Jeremy Bowen; and a magnificent lunch with celeb chef Greg Malouf, who has recently relocated to the UAE and is planning to open his first, as yet unnamed, restaurant in Dubai.

Lest you think the festival, or life in general in Dubai, is without controversy, Margaret Atwood pulled out of the inaugural festival of literature in 2009 in the wake of a novelist being blacklisted for potential offence to “cultural sensitivities.” Abulhoul said the decision not to include Geraldine Bedell’s The Gulf Between Us in the program was based on her knowledge of the Middle Eastern book-reading community after living in Dubai for 40 years. “In organising any literary festival, wherever it is in the world, one has to take decisions regarding the target audience,” she said. “I would hope that anyone informed and interested in the differing cultures around the world would both understand and respect the path we tread in setting up the first festival of this nature in the Middle East.” You can read more about the controversy in the Guardian.

I hope you’ve enjoyed reading about the festival. Next week I’ll share my impressions of Dubai.