Written by Classical Pursuits on Sep 14, 2011 in Ann's Musings, Today in Literature 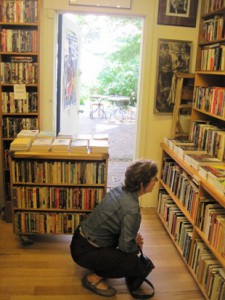 Last Saturday, Nigel Beale a bibliophile from Ottawa, was in Toronto. We spent a pleasant afternoon browsing used bookstores in my neighbourhood. Over lunch, we naturally talked about what we are reading. Nigel ignited as he told me about Bloom, a slim volume of poetry by a young Canadian,  Michael Lista, that had sent him over the moon.

In the very first bookstore we wandered into, Balfour Books, on College St., I introduced Nigel to Louis , the proprietor, and immediately made my way  to the poetry section – with little expectation of finding such a recent book. EUREKA! There it was – a brand new copy (offered to Balfour after a juried poetry competition).

I believe in truth in advertizing: I have not yet done more than sample the poems between the covers of this 76-page volume. But I have two great passions that coalesce in Bloom. Hence, this blog post. These are Homer’s Odyssey (which I have read, loved and discussed at Toronto Pursuits and have been reading, in various versions,  with my 8-year old granddaughter Thea) and James Joyce’s Ulysses (which I dared to  read, thanks to Mary Durkan whose annual Bloomsday events engendered a disinhibited enchantment with Bloom & Co, in a Classical Pursuits winter series under the inspired guidance of Michael Groden). Then there is Los Alamos. I have spent a fair bit of time in New Mexico where I developed a fascination with the Manhattan Project. (My mother and Kitty Oppenheimer briefly lived in the same rooming house in Philadelphia – before Kitty married Robert.) Finally, I am a lover of poetry.

Now, how to describe the young Michael Lista’s audacious and fascinating undertaking in the minimum necessary number of words? Especially when I have not yet read the book cover to cover!

Among the many laudatory reviews, I found a summary buried in a list of comments on goodreads.com that I think pretty well captures what intrigues me. What follows are the words of James Murphy. 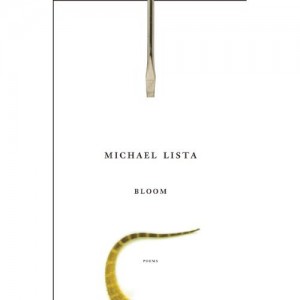 “… The 45 poems here form a narrative of a 1946 incident at Los Alamos in which a physicist working on a core of nuclear material was accidentally exposed, later to die of that radiation poisoning. But it’s much more than that. The poems cover the length of one day whose events are seen in parallel with Joyce’s Ulysses and therefore also with The Odyssey.

The protagonist, the physicist Louis Slotin, corresponds to Leopold Bloom, and the people in his life represent other characters in the Ulysses pantheon. Many well-known elements of the novel are alluded to, and the narrative flow of the poems closely follows that of Ulysses.

Slotin’s wife, for instance, represents Molly. She’s having an affair with one of Slotin’s colleagues, a Blazes Boylan figure. Los Alamos itself is a stand-in for Dublin, complete with a map such as that we’ve become used to in critical analyses of the Joyce novel. “Metempsychosis” is the title of 2 of these poems. “Wandering Rocks” another, and “Louis Slotin and Nausicaa.”

Against these suggestions of Ulysses are many ideas reflective of nuclear physics, fission, splitting atoms, and the general research business of Los Alamos. The bloom of the title refers to the moment nuclear material goes critical. The word itself appears in almost every poem. And, of course, it evokes Leopold Bloom.

But more, each of the poems is written in the style of a particular poet, named at the end of each. Some of the poets I’m not familiar with, but others include Anne Sexton, John Crowe Ransom, and W. H. Auden. Four of the poems carry the voice of Ted Hughes.

Only after finishing, when I went back to copy a favorite from the book, “A Pink Wool Knitted Dress” in Hughes’s style, did I have an aha moment and laughingly remember that Hughes himself wrote a famous poem with the same title about the day he and Sylvia Plath married, included in his volume Birthday Letters.

Lista’s ability to get under the skin of such poets as Hughes and Rilke and Robert Lowell and echo their voice and style is impresssive. His reimagination of Ulysses is intellectually stimulating and satisfying as well as being breathtaking fun, a ride in which we let him take us to the various stations of Joyce’s novel.

The book stands on its own, too, as engaging poetry and as an account of 21 May 1946 when the bloom which killed Slotin flared into a lab in Los Alamos. The final poem’s title, “Where I Was a Flower of the Mountain,” conjures up Molly Bloom again. It ends as the novel ends, with the multiple use of her (and Joyce’s) favorite word, “yes.” It bears the same transcendence and affirmation as Joyce’s work. After such a gratifying reading experience I felt the bloom of all that magnificence as well.”

If you’ve made it thus far, you, too, must share one or more of my passions. In which case, you may enjoy hearing Lista read from Bloom. Here he is reading “The Eclipse,” after Nobody.

I know this is pretty esoteric stuff. That is why, if you’ve made it this far, I would be especially interested in hearing from you. Does this sound like creative plagerism? Or, are you inclined to agree with Nigel Beale? In his review in the Globe & Mail, he says, “Standing on the shoulders of giants, Lista has moved the great conversation forward. The pleasure and challenge of reading this book lies in trying to figure out how he does it.”

Eager to hear from you.