Verse for Passover and Easter

[Editor’s note: In honour of Passover and Easter, we are reposting several poems Ann first shared back in 2011, the year of the January 25 Revolution in Egypt. We wish you a lovely holiday weekend!]

April may be cruel. It certainly seems so here in Toronto where we are seeing rain and still-chilly temperatures. But this week, many around the world are celebrating the great religious festivals of Passover or Easter. And April is Poetry Month.

For some years now, I have subscribed to The Borzoi Reader from Knopf. Each April, I receive a wonderful poem each day. Today’s poem by Julia Hartwig, born in Poland in 1921, is a reflection on freedom and its mixed blessings. It seems especially apt as Jews gathered yesterday evening for the first Seder of Passover, a ritual retelling of the story of the liberation of the Israelites from slavery in ancient Egypt.

YET WE DESIRE IT ABOVE ALL

A friend sent THE UNHAGADDAH: A PRAYER FOR EGYPT, a free verse poem by Esther Cohen that will be read at her Seder in New York. Here are the last three stanzas:

This year
I want to write an unhaggadah
for the pink shades of Egypt,
strong cardamom and wild oregano
for Oum Khulsum my all-time favourite singer
She sang all day
Egypt to Israel
Her voice still there
Angel of Life 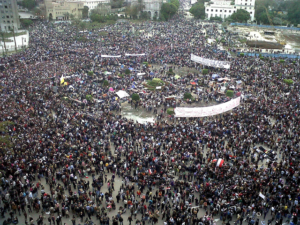 This year
not like any other
January 25
Egyptians all of them really all
beautiful old women, soldiers,
children, religious people
they found one another in the square
and moved toward
the Egypt who knows not Pharoaoh
and the life that becomes better
because of the way we are together 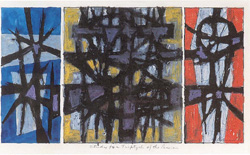 In the following three poems by American poet Amy Clampitt, celebrates the mystery, the wonder, the questions, the amazement of what has gone before, and the possibilities, the potential of what might come, of what we might become. Here is what Clampitt has to say about them. “Since it’s still, in my mind, Easter season, I’m going to read a poem called TRYSTOC, which, you see, has to do with Lent and Easter. It’s in three parts. I imagined it as being the verbal equivalent of the kind of altar painting one sometimes sees whether it’s a major, a central, panel that is larger than the two on either side. So there are two short poems on either side of the somewhat longer poem.

Neither the wild tulip, poignant
and sanguinary, nor the dandelion
blowsily unbuttoning, answers
the gardener’s imperative, if need be,
to maim and hamper in the name of order,
or the taste for rendering adorable
the torturer’s implements–never mind
what entrails, not yet trampled under
by the feet of choirboys (sing,
my tongue the glorious battle),
mulch the olive groves, the flowering
of apple and almond, the boxwood
corridor, the churchyard yew,
the gallows tree.

Think of the Serengeti lions looking up
their bloody faces no more culpable
than the acacia’s claw on the horizon
of those yellow plains: think with what
concerted expertise the red-necked,
down-ruffed vultures take their turn,
how after them, the feasting maggots
hone the flayed wildebeest’s ribcage
clean as a crucifix – a thrift tricked out
in ribboned rags that looks like waste
and wonder what barbed whimper, what embryo
of compunction, first unsealed the long
compact with a limb-from-limb outrage.

Think how the hunting cheetah, from
the lope that whips the petaled garden
of her hide into a sandstorm, falters,
doubling back, nagged by a lookout
for the fuzzed runt that can’t
keep up, that isn’t going to make it,
edged by a niggling in the chromosomes
toward these garrulous, uneasy caravans
where, eons notwithstanding, silence
still hands down the final statement.

Think of Charles Darwin mulling over
whether to take out his patent on
the way the shape of things can alter,
hearing the whir, in his own household,
of the winnowing fan no system
(it appears) can put a stop to,
winnowing out another little girl,
for no good reason other than
the docile accident of the unfit,
before she quite turned seven.

Think of his reluctance to disparage
the Wedgewood pieties he’d married into,
his more-than-inkling of the usages
disinterested perception would be put to:
think how, among the hard-nosed, pity
is with stunning eloquence converted
to hard cash: think how Good Friday
can, as a therapeutic outlet, serve
to ventilate the sometimes stuffy
Lebenstraum of laissez-faire society:

The spearpoint glitters in the gorge:
wonder, at Olduvai,what innovater,
after the hunting cat halfway sniffed out
remorse in the design of things,
unsatisfied perhaps with even a lion’s
entitlement, first forged the iron
of a righteousness officially exempt
from self-dismay: think, whatever
rueful thumbprint first laid the rubric
on the sacerdotal doorpost, whose victim,
knowing, died without a murmur,
how some fragment of what shudders,
lapped into that crumpled karma,
dreams that it was once a tiger.

a stone at dawn
cold water in the basin
these walls’ rough plaster
imageless
after the hammering
of so much insistence
on the need for naming
after the travesties
that passed as faces,
grace: the unction
of sheer nonexistence
upwelling in this
hyacinthine freshet
of the unnamed
the faceless