Around the World in 80 Drinks

Written by Melanie Blake on Jul 14, 2021 in Convivium, Travel Pursuits 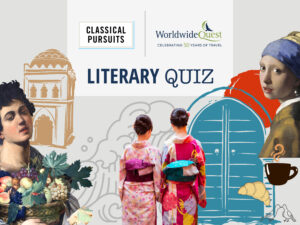 OK, we don’t quite have 80 drinks to recommend to you here. But spend enough time on the road with us, and you’ll see that at Classical Pursuits and Worldwide Quest, tasting the cocktails, wines and beers of different cultures is one of our favourite parts of travelling.

We look forward to seeing you at our Travel Trivia Night on Friday, July 23. There’s plenty of time to sign up if you’ve not registered. To make the evening more festive, we have put together a selection of drinks we love, including some alcohol-free options. For each destination featured in the quiz, we have ideas and recipes for you to try. Some are simple; others are more ambitious and might require a trip to your local grocery store, state store or LCBO—but will be worth the effort, we promise! All are delicious.

Cheers! See you at Trivia Night. 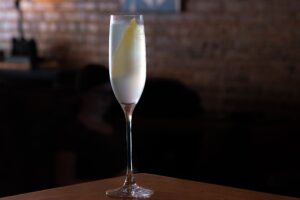 For seminar leader Wendy O’Brien, a great way to start the evening is with the classic cocktail the French 75. A version of this cocktail was created in 1915 at the New York Bar (later Harry’s New York Bar) in Paris. The story goes that the bar’s Scottish bartender Harry MacEhlone named the drink after the French 75 mm field gun, first adopted by the French military in 1898 but prominent after 1915 and the dominance of trench warfare along much of the Western Front. The drink delivered a kick as powerful as the gun, so the legend goes.

Here’s a recipe for a modern French 75:

Combine gin, lemon juice, and syrup in a shaker. Fill shaker with ice, cover and shake vigorously, strain and pour into a flute glass. Fill with champagne and garnish with the twist. As a winter adaptation, Lisa suggests using cognac in place of the gin. 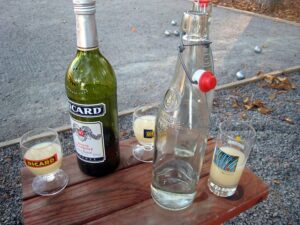 Worldwide Quest managing director Laurielle Penny loves a pastis, made with the anise-flavoured liqours Ricard or Pernod. Classic (and best!) way to drink:

Pour 2cl (0.68 fl oz) of Ricard or Pernod into a glass, add 10cl (3.4 fl oz) of cold water. Add 2 ice cubes (always after adding the water, never before). Do not add the ice before adding the water, although some Parisiens regrettably favour this method. By doing so you reduce the lovely cloudy colour of the pastis. The anethol (the oil that gives that colour) freezes if ice is added and won’t produce the wonderful fusion that’s so important to the drink.

Both Lisa and Paris trip leader and Classical Pursuits director Melanie Blake always enjoy a kir. The ingredients are associated with Burgundy, but this aperitif is enjoyed all over France. Kirs are refreshing and easy to make:

Put crème de cassis (blackcurrant liqueur) in a white wine glass and top up with aligoté or chablis (or other dry white wine). The ratio of crème de cassis to wine can vary from 1:10 to 1:5 depending on your taste.

Cocktails may not be the first thing that comes to mind when you think of Morocco, but there are a number of entrepreneurs and bartenders who are fostering a culture of creative mixology. Morocco trip leader Melanie can’t wait to visit Baromètre in Marrakesh and taste their “Marrakesh Market,” which features whisky, cinnamon, orange and saffron syrup served in a smoked glass. Back at home, she loves the cocktails at Mourad Lahlou’s San Francisco restaurant aziza. Here’s a recipe served at aziza some time ago, via the April 2006 issue of Bon Appetit, for Moroccan mojitos: 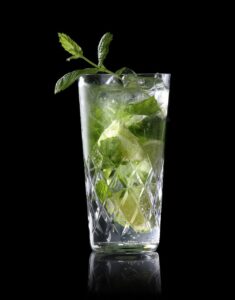 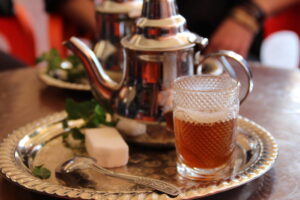 Looking for something more traditional? Laurielle and Worldwide Quest marketing manager Samantha Clark are all about the mint tea! Especially with mint fresh from Samantha’s garden. Here is Laurielle’s recipe:

Add boiling water to tea and let steep for 2 minutes. Stir in sugar and mint sprigs and steep another 3 to 4 mins. Serve in small heatproof glasses. 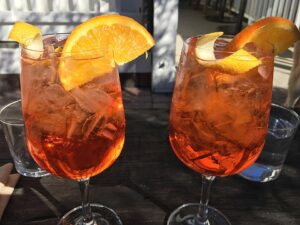 Rome trip leader Nella Cotrupi loves the Aperol spritz as her favourite summer apperitivo. She says that “while it is more of a northern thing, it is enjoyed across Italy for its deep orange, bittersweet flavour.” The prep is simple:

Fill a white wine glass about halfway with fresh ice, and add Prosecco, Aperol and soda in a 3:2:1 ratio. We recommend a good-quality dry Prosecco or other dry sparkling white to cut the sweetness of the Aperol. Garnish with an orange slice.

Nella (and the rest of us!) appreciate the even stronger bitterness offered by the Negroni. In the classic preparation:

A lovely summer variation that Laurielle likes is a Negroni sbagliato (mistaken Negroni). The drink’s origins are not well-known, but legend holds it resulted from a harried Italian bartender mistaking Prosecco for gin when making a classic Negroni:

For those who prefer wine, Nella recommends a Frascati Superiore. This appellation is made from at least 70% Malvasia Bianca di Candia and/or Malvasia del Lazio (aka Malvasia Puntinata) grapes from the hills of Lazio outside Rome. 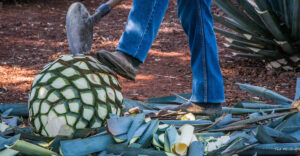 “Para todo mal, mezcal, y para todo bien, tambien.” (For everything bad, mezcal; and for everything good as well.)

Many of us at Classical Pursuits and Worldwide Quest are united in our love for mezcal and its wonderful smokiness. Mezcal is a spirit made from the core of the agave plant (piña), created by cooking the plant “inside earthen pits that are lined with lava rocks and filled with wood and charcoal before being distilled in clay pots.” (Food and Wine). Note that tequila is a type of mezcal, but it’s made only from blue agave and is distilled in a different process that gives it a different taste.

Laurielle likes mezcal in a Paloma. Here’s her recipe:

Pour some kosher salt on a plate. Rub half of rim of a highball glass with a grapefruit wedge; dip rim of glass in salt. Combine 1/4 cup fresh grapefruit juice, 1 tablespoon fresh lime juice, and 1 teaspoon sugar in glass; stir until sugar is dissolved. Stir in 1/4 cup mezcal or tequila, add ice, and top off with 1/4 cup club soda. Garnish with grapefruit wedge. Makes one serving. 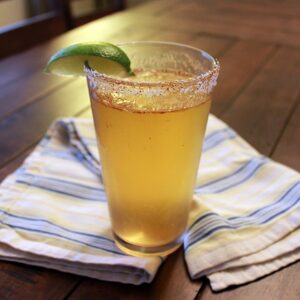 If you’re more into beer, Samantha recommends the michelada, a salty, savoury, spicy beer cocktail. As Esteban Castillo of Chicano Eats notes, there are many ways to make micheladas. His recipe is one of Melanie’s favourites. You can also try a version without tomato juice from Yvette of the Muy Bueno cookbook.

And if you are looking for a delicious, zero-proof summer drink, try some strawberry, watermelon or cucumber aguas frescas.

Both gin lovers and those not so sure about gin will want to give genever a try. What’s the difference between the two? Genever, originating in the Netherlands, was a kind of precursor to gin. Gin can be made from any neutral spirit, whether derived from grains like corn, wheat and rye, or from grapes, sugar, potato, etc.) It’s flavored with botanicals, notably juniper. Genever also incorporates botanicals, but it always uses a base of grain that is malted, similar to the process used in making whiskey. Broadly speaking, genever has a (not surprisingly) maltier and richer, less citrus taste than gin.

A genever and soda is a delicious, easy summer treat:

You could also make an Old Fashioned, substituting genever for the whiskey. 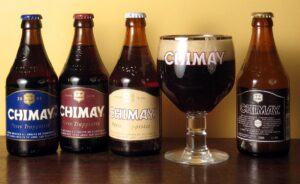 In a combo popular in Amsterdam, you can chase genever with a beer, whether Heineken or a local craft beer. And Belgium is of course known for its truly superb beers. Among these are the beers made by the five Trappist breweries still active in the country. Netherlands and Belgium trip leader Sean Forester especially likes the Westmalle and Chimay Trappist beers. Westmalle makes a delicious Tripel (used in a general sense to describe a strong pale ale), and Chimay makes its beautiful Rouge, a copper-coloured beer that is both fruity and a bit smoky.

Sean also recommends Belgium’s lambics — these are beers fermented through exposure to wild yeasts and bacteria native to the Zenne valley in the Brussels region, as opposed to being fermented with brewer’s yeast. Among his go-tos are Cantillon and 3 Fonteinen. Both are known for their guezes and krieks, which are types of lambics. Lambics often can have a funky or sour, but balanced, taste.

You can also never go wrong with Duchesse de Bourgogne, a rich, malty and slightly sour Flemish red ale that is one of Melanie’s favourite beers and is relatively easy to find.

We hope you enjoy our recommendations! What drinks do you like to try while on the road? What are some of your most memorable discoveries?