CLASSICAL TRIVIA! — Battle of the Bard

Written by Melanie Blake on Mar 17, 2014 in Convivium, Guest Blog 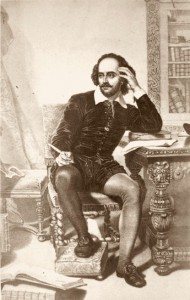 We just can’t get enough Shakespeare at Classical Pursuits! In this latest blog post, Katherine Barber, founding editor-in-chief of the Canadian Oxford Dictionary, has a lively discussion with educator and Travel Pursuits leader extraordinaire Gary Schoepfel about our February 25 email blast on words coined by Shakespeare. Katherine is the former host of a CBC segment that earned her fame as the “Word Lady,” and Toronto Pursuits veterans may remember her as an afternoon speaker at the 2011 program. Gary has led several trips for Travel Pursuits, including Chicago and Turkey in 2013 and India in 2014, and will lead a seminar on Midnight’s Children at this summer’s Toronto Pursuits.

We’ll get started by re-posting the paragraph in question:

You cannot ignore him. He’s got you surrounded. You may think this claim baseless, perhaps even laughable, but he’s there at your elbow. Daily, he jumps trippingly off your tongue. He’s present when you wake at dawn and when the moonbeam slips through your window at night. You may chance upon him in the bedroom. You bump into him at the cinema. He’s there when you’re lonely; he’s there when you’re gloomy. That love letter? His idea. When your account dwindles and you go on a rant, think of him. The soft-hearted know him, and so does your hardhearted employer. Embrace this idea. It’s not just skim milk.

Katherine questioned where we had gotten the information, contending that “Shakespeare did not in fact coin most of those words (moonbeam, elbow – even “at one’s elbow” – bump, rant, embrace, love letter, bedroom (in the sense you are using it), etc.”

Gary Schoepfel, author of the paragraph, had this reply:

“New meanings are given to old words. To realize how meanings change, note that sharer in Elizabethan times meant a stockholder in a theater company, and housekeeper was not a maid but a landlord of the theater building or ‘house.'”

The point of the paragraph is simply to suggest Shakespeare’s vast contribution to our language, and how routinely and unwittingly we use his coined words and phrases. He surrounds us.

Again, thanks for your interest. It’s reassuring to know that someone “out there” reads our posts closely and thoughtfully. I’d enjoy having you in my July seminar on Midnight’s Children — a wonder-filled book that demands close reading.

My source is the Oxford English Dictionary 3rd edition online. Some of the entries, like “moonbeam,” will have been updated with an antedating since the Merriam-Webster book came out. This will more than likely happen to many, perhaps most, of the words currently having a first quotation from Shakespeare, as revision proceeds on the dictionary. At present, B-L and S-Z, roughly, have not been revised. Therefore, it is very risky indeed to make claims about Shakespeare “coining” the words for which he is the first evidence if they are in those stretches of the alphabet.

That others should be in the Merriam-Webster book at all mystifies me: “elbow” has been in the English language since Anglo-Saxon times, and even “at your elbow” to mean “nearby” is first attested in 1548, before Shakespeare was born. An expression for which the OED does have a first attestation from Shakespeare is “up to one’s elbows,” but since this is in an unrevised part of the dictionary, it may well yet be antedated.

As Gary points out, their conversation raises many interesting questions about sources and their use for writers and readers to consider. One is accessibility: Gary used a book that he owned, but Merriam-Webster also makes an online dictionary that is based on the print version of Merriam-Webster’s Collegiate Dictionary, 11th Edition available free. The OED offers more in-depth information about etymology than M-W online, but its electronic version is a subscription service that one must either purchase or access from a library or other institution that subscribes, making it somewhat less easily accessible to all.

A second question is credibility and reliability: both Merriam-Webster (now an Encyclopaedia Britannica company) and the OED trace their roots to around the middle of the 19th century, and the dictionaries are other books they publish are generally considered to be trustworthy sources. As Katherine points out, parts of the OED have been revised since Gary’s book was published, and thus would have more current scholarship. The question remains, however: how do we know when to trust a source? Our aim in this post is not to answer it, but merely to give you some food for thought.

Finally, Katherine’s point about updating brings us to the question of the constant evolution of language and the never-ending quest of dictionary editors (and indeed people in basically every area of human endeavour) to make known the most complete knowledge they have at the time. Both dictionaries are always works in progress and, as Katherine tells us, large parts of the OED‘s 3rd edition online have yet to be revised. Perhaps new information will come to light about Elizabethan English and the role Shakespeare played in shaping it.

Many thanks to Gary and Katherine for such an interesting discussion about our complex and beautiful language!