Beyond the Femme Fatale

A remarkable study showing that 70 percent of the world’s fake news and digital media manipulation emanates from Russia was recently published by The Economist. The finding takes me back to the Cold War and how it impacted the minds of impressionable young people growing up under the shadow of the threat of nuclear Armageddon. I was raised on the Canadian side of the Detroit River in the 1950s, and I remember vividly the squawk of the emergency air-raid shelter blast, the test that went off every Saturday afternoon at exactly one p.m. It was to prepare us for a Soviet nuclear attack that seemed increasingly likely as the rhetoric of the Cold War intensified. It also engendered my enduring fascination with espionage.

These days I’m writing my own novels featuring a woman Soviet spy, so it’s top of mind for me as I follow the daily machinations of Russian agents of influence in Western politics. Beneath the attention-grabbing headlines lie complex, unsettled questions about loyalty, duty and political convictions. I invite you to shine a light on this shadowy world in my Toronto Pursuits seminar, Women Spies in Cold War Fiction. We’ll explore how the Cold War brought about an entirely new sub-genre of sophisticated narratives about the ideological friction between capitalism and communism, liberal democracy and one-party rule. In discussion we’ll pay special attention to female characters and various portrayals of how women survive in perilous times.

Together we’ll be investigating three novels: The Spy Who Came In from the Cold, John Le Carré’s first major Cold War novel, his later masterpiece The Little Drummer Girl, and Jennie Rooney’s Red Joan. At first glance, the female protagonists Liz, Charlie and Joan seem nothing alike. Yet there is an overriding theme that connects them: Unlike their male counterparts, these women agents see themselves less as perpetrators of war and destruction and more as earnest actors who believe their actions are on the side of world peace and reconciliation. What attracts the women in these spy thrillers to embrace the dangerous cloak-and-dagger world of deception and treason? Are they right to do so?

Take Charlie, the female protagonist in The Little Drummer Girl. She is angry, bored and restless, searching for answers to both her unhappiness and the growing corruption she witnesses in British society. Charlie is easy prey for Israeli intelligence, the Mossad, in its escalating battle with the Palestinians. This novel is not the average Cold War story—the usual conflict waged between the Soviets and the Americans or Brits—but it perfectly reflects how Soviet–Western politics reached deep down into the lives of ordinary people across the globe. Charlie is the quintessential radical feminist, and the tone in which Le Carré portrays both her strengths and weaknesses offers rich opportunities to discuss reigning ideas about feminism, nationalism, international conflict, and how slippery a thing allegiance to one side or the other can be, particularly for women. 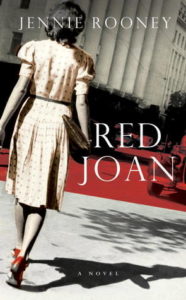 We’ll also unpack Joan, the hero (or anti-hero) of Red Joan, Jennie Rooney’s engaging characterization of real-life British spy Melita Norwood. At the age of 87, Norwood was identified by a Soviet defector as having been the most important and longest-serving Soviet spy of the Cold War era, causing more damage than the members of the Cambridge Five. She worked for a government organization that gave her access to the highest level of confidential documents on atomic research, which she dutifully passed to Moscow.

Their gender protected both Charlie and Joan from early detection. Gender initially saved them but also ultimately crushed them. Here again we’ll find fascinating material for discussion of gender dynamics, power and control.

This seminar is for everyone who loves a good story. Those us of who remember or came of age during the Cold War will be able to ponder and interpret text as “lived” history, set against a background of the Berlin Wall, the resistance in Hungary and Czechoslovakia, the October Crisis, the Bay of Pigs and the Chernobyl nuclear explosion. For younger generations, the seminar is a way to connect present and not-too-distant past through the lens of three novels that pose defining questions about the 20th century. The battle between East and West transformed the characters in these novels as it might have changed each one of us.

I look forward to meeting you at Toronto Pursuits!