GUEST BLOG—Feeling at Home with Ulysses by Michael Groden

At home. Mentioning Ulysses might conjure up a range of associations – important, classic, difficult, even unreadable – but “at home” isn’t likely to be one of them. Sixteen people felt anything but comfortably home on a Monday morning this past July as they awaited the start of a Toronto Pursuits seminar on Joyce’s novel. Some of them had read it before and had attended Toronto Pursuits in the past, even were regulars, and they were excited. Others were new to Ulysses, and in some cases new to Toronto Pursuits as well, and they were more nervous. I was nervous, too. I’d led many groups through Ulysses before, both university students in undergraduate and graduate classes and also adults in New York City and Toronto, so approaching Ulysses didn’t worry me. But I had never led a Toronto Pursuits seminar before and didn’t know what to expect as the list of names I had been given a few weeks earlier came alive in the men and women now before me.

Then the first session began, and as we introduced ourselves and began to talk about Stephen Dedalus, the Ulysses character I had designated as the first session’s topic, something magical happened. People began to express their ideas about the chapters we were discussing and their reactions to them, including their bewilderment over one passage or another. Someone had a question, someone else attempted to answer. What began for many as nervousness about the difficult work to be confronted and the group context for talking about it quickly evolved into a challenging but also rewarding and even comfortable conversation about the novel. Ulysses can do that. And it was the cerebral, over-educated, and self-absorbed Stephen Dedalus at its start who produced such a result. The next day, the participants in this conversation began to feel closer to “at home” when we turned to the much more accessible, human and humane, emotionally open character Leopold Bloom.

There is no doubt about Ulysses’ difficulty. Its references to medieval philosophy and theology when Stephen’s mind is on display, its immersion in 1904 Dublin, and Joyce’s many experiments in structure and style guarantee that it will always make for challenging reading. But I am convinced, and I think that most if not all of last year’s seminar participants would agree, that there is also no doubt about its pleasures and rewards. 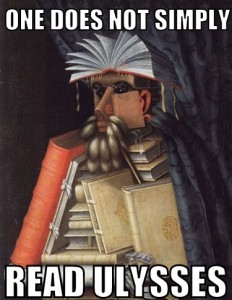 Ulysses’ three main characters – Stephen Dedalus, Leopold Bloom, and Molly Bloom – are all isolated individuals living through one day in Dublin: June 16, 1904. Yet this work about isolation tends strongly to bring people together in powerfully meaningful ways. A group is an ideal situation in which to encounter Ulysses, since it allows people to voice their struggles and also their insights and it lets them learn from each other in both their considered observations and their unique areas of knowledge and experience that unexpectedly help to illuminate aspects of the novel. Conversations within Ulysses tend to be banal or frustrating – the real richness happens within the characters’ minds, not in what they say to each other. But the conversations that it inspires are often rich and memorable.

Early in the novel, when Molly Bloom doesn’t understand a word from a book she is reading, she asks her husband Leopold, “Who’s he when he’s at home?” His attempts to define her word bewilder her, leaving her anywhere but at home, but a week with Ulysses in the company of committed, energetic, and highly intelligent readers eager to talk and to listen to each other can easily take you where you might least expect to be: at home with Ulysses. Come join us and share in this immensely satisfying and enjoyable experience.

You can click on the link to learn more about my seminar, “Who’s he when he’s at home?”: James Joyce’s Ulysses. I’ll look forward to meeting you at Toronto Pursuits 2016!