Written by Classical Pursuits on Dec 11, 2013 in Guest Blog, Journal, On the Road with Ann, Travel Pursuits

The leaves were showing their first golden tinge when we arrived in the Luxembourg Gardens, and a few had begun to fall on beds still bright with summer flowers. The city’s springtime glories are undeniable, but for me the best time to visit Paris has always been September. It’s the rentrée, a time of activity and optimism when Parisians turn to their various pursuits with renewed purpose. The first gusts of the fall wind whip through the garden’s apple orchards and graveled paths, bringing with them an almost tangible energy. It is the perfect setting for us to slip out of the 21st century and back into the Belle Epoque, back into a city that stands ready to move into a new age.

How did Paris, which even in 1800 retained much of its medieval character, become over the next 100 years a modern metropolis that was the artistic and cultural center of the world?

We set off to find out, with some trusted companions at our side: Ingres, Carpeaux, Corot, Delacroix, Baudelaire, Zola, Maupassant. To help the group form some answers, Sean Forester encouraged us to consider the art and literature of the 19th century in the context of the relationships between the movements that shaped them—namely, neoclassicism, romanticism, realism, impressionism, and modernism. Our journey began at the Louvre, which, as a showcase for contemporary French art, had played an important role in the city’s transformation. I stood before one painting, Géricault’s Raft of the Medusa, and recalled another American woman’s reaction to it 160 years ago: “I gazed until all surrounding objects disappeared, and I was alone in the wide Atlantic,” wrote Harriet Beecher Stowe. She was transported not just by the painting’s power to make its viewers feel the suffering it portrayed, but also by its terrible beauty. 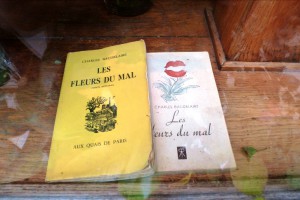 We studied other paintings with the same care as Stowe. There was David’s meticulous portrait of Napoleon in his study, where the emperor and his elaborate desk stand straight, the expensively clad knee of the man echoing the gilded curves of the carved lion on the desk leg. But there were also Monet’s paintings of Giverny, where color, light and water merge, and up close, nothing is what it seems. In our readings, Zola’s almost clinical descriptions of a battle for a windmill during the Franco-Prussian War contrasted with Baudelaire’s verses, each transporting us higher into the ether yet deeper into a very personal melancholy. Colette’s novel Chéri masterfully evoked urbane settings where the witty conversation at fashionable gatherings carried with it an undercurrent of sadness at what might have been.

We had enough paintings to see and books to discuss to last a lifetime of trips, but Haussmann’s sandstone city lay before us. Lisa Pasold’s walks took us out onto the streets, and she told with great flair the stories of Parisians on the make, creating new identities for themselves as they honed their craft. There was Sarah Bernhardt, who after losing one of her legs acted from a chair into her nineties, and the indomitable George Sand declaring her intention to surround herself with the company of Paris’s most distinguished writers. As the week went by we also tried to understand the sociological contrasts that shaped the period. Women enjoyed greater freedom; they could study painting at the newly created Académie Julian or walk unchaperoned under the covered arcades and still remain ladies. The Dreyfus affair, however, brought renewed discrimination against Jews. We ambled down the Boulevard des Italiens like so many dandies had done before us, but we also reflected on the assassination of Socialist leader Jean Jaurès, whose death in July 1914 came as World War I brought to a definitive end the glamour of the Belle Epoque. In my eyes we were both flâneurs giving ourselves over to the impressions of modern-day Paris and the city re-created by Sean and Lisa, and secular pilgrims seeking a deeper understanding of a place that was like no other for 19th-century artists and writers. Many of their most memorable works show Paris in all its facets with an enduring clarity.

Our trip came to a close in true Belle Epoque style, with dinner at the beloved Train Bleu. As we sat among the restaurant’s curving brass fixtures and brightly colored paintings, my thoughts returned once more to Stowe. From nearly the moment of her arrival in France, something deep in her spirit had resonated with the French people’s love of and sensitivity to beauty, and she saw a long-neglected need fulfilled: “One in whom this sense had been long repressed, in coming into Paris, feels a rustling and a waking within him, as if the soul were crying to unfold her wings.”

If you are curious to see more of our space and time travel to La Belle Epoque Paris, you can view this slide show.