I received a blog comment from Robert Anderson of Los Angeles. To manage the hard times during his daughter’s grave illness, he created a model kit for Monticello, the extraordinary home Thomas Jefferson designed for himself in Charlottesville, Virginia. 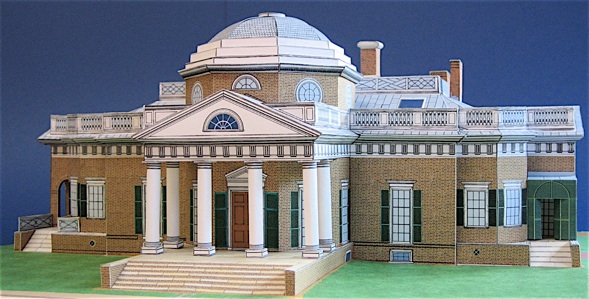 Anderson created a 1/100th scale paper model of Monticello desgned from the measured plans made made during the government’s 1992 Historic American Buildings Survey. Not just another card paper kit, this arichitectural quality model is the most accurate representation of Thomas Jefferson’s home available. Whether you are an architect, a student interested in American colonial history, or a fan of  Thomas Jefferson, I think you will enjoy building this exact copy of America’s most famous private home — the only one to qualify as a World Heritage Site.

I plan to make this a family project this summer, including the grandkidlets. The model can be ordered online and printed on heavy paper from your own computer.

You will also know by now about our own Classical Pursuts trip to Charlottesville this May, Founding Farmer: Thomas Jefferson at Home. At Monticello we will be spending time with Leni Sorensen, the African-American research specialist at Monticello. As a folk singer, 1960s activist and then farm wife, who also holds a master’s and Ph.D. from the College of William and Mary, Leni is the epitome of the public historian. Leni will offer a unique perspective on Jefferson’s life at Monticello, including his views on slavery and his fathering of numerous children by his bi-racial slave Sally Hemming.