TRAVEL PURSUITS – Why a new book for Vietnam?

Written by Classical Pursuits on Apr 28, 2012 in Journal, Today in Literature, Travel Pursuits

Here was the headline in the book review section of the  Globe and Mail, Canada’s national newspaper that caused me to stop and take notice. “Vincent Lam’s first novel, about Vietnam, has makings of a masterpiece.”

Vincent Lam is an emergency  physician Toronto who also writes – very well.  His first book Bloodletting & Miraculous Cures won the prestigious Giller Prize and has been adapted for television on HBO Canada.

Now, from this internationally acclaimed, and bestselling author, the son of Chinese expatriate émigrés from Vietnam, comes a superbly crafted, highly suspenseful, and deeply affecting novel set against the turmoil of the Vietnam War.

It was hearing the real-life stories of his parents and grandparents as a child growing up in Nepean, Ontario, – and simultaneously knowing that the community they described had vanished forever – that first inspired Lam to render them in fiction. He felt the need even more strongly as he read through all the standard English-language novels of the war.

“In a sense they added to the allure of the subject because I knew there was a whole other perspective,” Lam says, ticking off the usual suspects – Graham Greene, Tim O’Brien, Marguerite Duras. “I knew that in the midst of their conversation was another voice.” 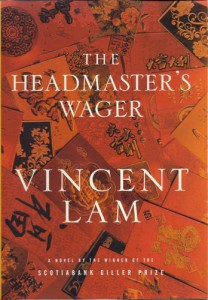 In The Headmaster’s Wager, Lam puts that voice in the mouth of Percival Chen, a wealthy, somewhat dissolute Chinese immigrant whose ambition to remain distant from the turmoil of his adopted country is rewarded by total immersion in its ultimate apocalypse. It departs from the norm not only in its fully realized Asian perspective, but also in its steady focus on the personal lies of ordinary people caught in the war.

Blessed with intriguingly flawed characters moving through a richly drawn historical and physical landscape, The Headmaster’s Wager is a riveting story of love, betrayal and sacrifice.

Here is a link to recent reviews.

You can view a short video of Vincent Lam talking about this book.

I have the sense that Lam’s book will imaginatively capture Vietnam at a tumultuous time not unlike Salman Rushdie’s Midnight’s Children sweep of India at the time of Partition.

We will also use Understanding Vietnam by Neil I. Jamieson as valuable background and discuss several short stories from Vietnam: A Traveler’s Literary Companion, by Vietnamese writers living in Vietnam and abroad.

If you are interested in discussing Dr. Lam’s book and the other readings with us in Hanoi, Saigon and cruising up the Mekong River on a brass and teak river boat, here is further information. Vietnam Voices: A Balanced Opposition.