What Does It Mean to Write a Life? David Saussy on Hamilton

Written by Melanie Blake on Feb 10, 2021 in Convivium, Guest Blog 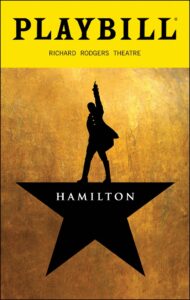 Hamilton. Many love it. Some just hate it.

I’m one of those who love it. And my kids love it too. I love the big thesis of the show that you don’t have to look like the founding fathers (that is, be white) to learn from and be inspired by their aspirations and struggles and even (especially) their failures. My two-year-old sings, “I’m not throwing away my shot” — sung by Hamilton in the show — and he asks to hear the music in the car on the way to his brother’s school in the morning. My 9-year-old knows pretty much all the lyrics — even the swear words (which is fun to talk about). I think the use of rap and hip-hop vernacular is a stroke of brilliance — nobody thought it would work, not even Stephen Sondheim — but it turns out that they were wrong: hip-hop has become a highly effective means of advancing dialogue and the action for the art form of musical.

To be honest, I’ve never been particularly fond of musicals, but I’m lovin’ me some Hamilton. I come from a musical background — I play saxophone and have studied piano and cello — so the music is something I respond to. But I love the casting of the original show, the dancing, the costumes, and the story too. The show put together tremendous talent in a whole host of artists. Also, the show is just filled with references to actual historical documents, some of them great — which is just one of the reasons why I am enthralled with this project.

Whatever you feel about the musical, you can’t deny that Hamilton has tapped into something in our collective psyche that is worth exploring. What I want to do is to tackle the whole phenomenon — the artfulness of the musical itself, the libretto by Miranda, the musical composition, Chernow’s biography, as well as Hamilton’s writings — from the Hurricane letter, to the Federalist Papers, to the Reynolds Pamphlet.

One absolutely fundamental question raised by Miranda in the musical concerns stories (in Greek, mythos). How do stories, and history, get told, out of the stuff of real life? Poor Burr never expected to be “that guy” — he tried to play his cards close to his chest, to protect himself as he sought to make a name for himself — yet Aaron Burr will be forever known as the guy who shot Hamilton in a duel.

The musical can help us think about how stories get made. This is an important question in our day (in the winter of our discontent?) as we face the fabrication of “alternative facts” and the proliferation of conspiracy theorizing that can never be falsified by hard evidence.

If we want to take “facts” seriously, we need to take the question about stories seriously – especially if it is true, as some say — like my wife Briana Saussy, who some of you know, and Terry Windling and other voices — that we are in a way, strangely, an unstoried people. Could it be that an unstoried people runs the greater danger of confusing fact with fiction, reality with fantasy? We’re faced with an interesting possibility that one remedy to our confusion does not reside exclusively in exposure to sobering fact, but includes paying attention to the quality of our fantasy life — the stories we read, listen to, and enjoy. 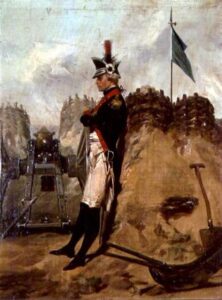 Reflecting on the story of Hamilton — as it is told in the musical, as it is told in the biography, and as it emerges in the great essays of the Federalist Papers — may be to reflect on our own story, and the story of life in the modern world. Hamilton, an orphaned immigrant trying to find a home at a time of crisis, struggles his whole life to overcome a sense of fatalism. There are lurid parts to the story too — like the affair with Maria Reynolds — which cannot be ignored. We don’t need to have enacted the same things in our lives to see that at bottom, his story is ours, in the form of a question: Can we truly exercise our power of reasoned choice to make things better, or are we forever doomed to be at the mercy of forces beyond our control?

I’d like to say “yes, totally” and be done with it — but then I wouldn’t be being honest. This is a very real question, about as real as it gets, and it’s one I struggle with. Not a ‘philosophical’ one, but a life question, one for here and now, that is raised by everything one chooses.

As it turns out, Hamilton actually writes this question in his opening salvo in Federalist #1. The musical and Chernow’s biography and the primary sources can help us to see how central that question is for Hamilton, and for us. I want it to be on the table in our work on this material.

Diving into Chernow’s biography and Miranda’s libretto, I’ve found that Miranda was forced to fabricate some things in the musical’s story, in order to make the parts hang together. I want us to talk about that. Chernow, or any biographer, in attempting to tell the story of the life of Hamilton, faces the same problem — a problem faced since the days of Plutarch many hundreds of years ago. Plutarch compared himself to a portrait painter, in his telling of the lives of eminent individuals. What does it mean to write the life, not only of Hamilton, but of any human being? I want to also explore what Miranda might have meant when he said that Hamilton is the most hip-hop of the founding authors.

In many ways, this series on Hamilton is the most unorthodox project I’ve take on. I’m big into the healing aspect of Socratic seminar, especially serious conversations about the roots of our political life. Healing not in the sense of being an emotional outlet, but rather in the deeper sense of restoring trust we have in our own minds and hearts, trust in each other in our own minds, in our capacity to find solidarity with one another, in our thoughtfulness together about important questions. I’m expecting this seminar not only to be fun, but one of my most healing yet. The seminar starts February 13. There are only three spots left, so make sure to grab your space.