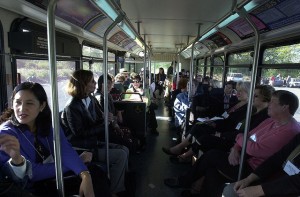 Last week on my way to the office—after an early morning foray into the part of Homer’s Odyssey where Odysseus begins to tell the story of his adventures to the hosts who have rescued him—my attention was caught by two fellow bus passengers recounting to each other how they had spent the weekend, where they had gone, who they had met, what went according to plan, what went astray. It was not a conversation, really—just a swapping of mundane stories. Nothing exceptional about the exchange but it prompted me to start listening more deliberately to the talk around me in public places and in the office. A lot of the words we spin out take the form of stories, or, to be bit more abstract, narratives. We seem to like recounting our experiences to others. It’s a way of telling others who we are—or think we are! (Have you noticed how that word, “narrative,” is becoming more and more widely applied? Doctors construct patient narratives. A business proposal is required to include a narrative. Student assessments have to contain a narrative. There is even a fairly well established practice in psychology called narrative therapy.) To indulge some pedantry, the Greek root of the English word “narrative” is related to the root of the English word “know”: to narrate is to know, a way of understanding the world through how things play out in time and space. 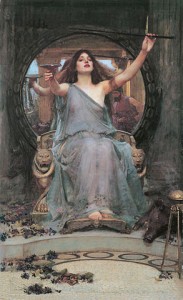 So, to return to the Odyssey: of course it is, as a whole, a story. And it is also full of stories—those of you who have read it will recall many of the major episodes: the story of the Cyclops; the story of the witch Circe, who turns men into swine; the story of Odysseus and the Sirens; the story of Odysseus’ descent into the world of the dead; the story of Penelope’s weaving and unweaving to thwart her suitors’ plan of marriage; and of course, the story of Odysseus’ guile in outwitting and then slaughtering the men plundering his household. On another level, the Odyssey is full of stories that are both very specific and very general: they not only operate as depictions of particular circumstances, but also as explanations of bigger, more general issues: the nature of heroism and valor; the qualities that best—or least—suit fathers, sons, mothers; the characteristics of good and bad leaders; and many more.

So what does all this have to do with my early morning insight on the bus? I’ve been reading the Odyssey for many years, over fifty. I’ve led two series of Classical Pursuits discussions of it during the last fifteen years. Each time I read it, different facets emerge and this time, what is first and foremost for me is how much the Odyssey is not only a story full of stories, but that it is self-consciously pre-occupied with the activity of storytelling itself. Again and again, throughout, it makes us step back from its own forward momentum, and compels us to reflect deeply on why and how we narrate. 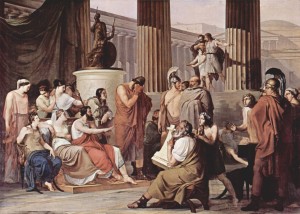 We see Odysseus himself, in disguise and unknown to storytelling bards, listening to the story of his own life, legendary, defining who he is beyond his ability to control the public narrative of his own identity. We see him then tell episode after episode to his eager listeners to take control of how he is perceived (is he a reliable narrator? In what sense are his stories “true”?) We see Odysseus return to his home in disguise and use stories tactically to best the suitors, test Penelope, and regain his kingdom—all lies but playing out with the truth of pragmatic effectiveness. If to narrate is to know, and if we can almost not help ourselves from telling each other stories, in hopes of knowing and being known, then the Odyssey has much to teach us about perhaps our most characteristic human trait.

I hope you will join me this summer to explore why an Odyssey is not a random wandering through a string of adventures, but an attempt to build a personal narrative that is rich, compelling, and convincing to ourselves and others. Click on the link for more information and to register.