ON THE ROAD WITH ANN – almost

Written by Classical Pursuits on Feb 23, 2012 in Journal, On the Road with Ann, Travel Pursuits 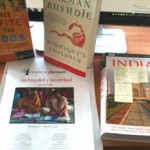 We have read so much and many of us have watched lots of films and talked to both South Asians and those well-traveled there.

I watched A Passage to India the other night and was overcome with embarrassment at the arrogant excesses of the British Raj. In more current books, the picture is hugely discouraging. A strong argument is made that the most destitute in India remain untouched by the economic growth of the middle class, in large degree due to lack of political will and rampant corruption, not for lack of money or water or wheat.

And yet… and yet, there is so much more that is India. I just don’t know how I will take it all in. I know I will not make sense of it. While I don’t plan to try, my western bent is apt to look for patterns and answers.

I am caught between the  big idea in EM Forester’s sprawling novel, the “muddle” and “mystery” and, in fact, prominent in the two books we will be discussing, Salman Rushdie’s Midnight’s Children and Edward Luce’s In Spite of the Gods: The Strange Rise of Modern India.  “Muddle” has connotations of dangerous and disorienting disorder, whereas “mystery” suggests a mystical, orderly plan by a spiritual force that is greater than man.

Meanwhile, I am in my own local muddle, getting all the loose ends tied up. Sadly, one of our travelers had to cancel at the last minute. She got sick during a recent trip to Cuba. We will miss her.  But I must push on. So much to do. And I still have to take out the garbage, collect the laundry…

Stand by for posts – technology permitting. I understand there are two rather rare adapters are used in India in different places. I’ve been able to get only one.  And then there is my own frustration with all the gizmos. The periodic power outages we’ve been warned about just add to the adventure.

Off into the unknown. If you’ve been to India, or ARE South Asian, please offer your own reflections and experiences. I and others will be interested.