Written by Classical Pursuits on Mar 2, 2012 in Ann's Musings, Journal, On the Road with Ann, Travel Pursuits

Old Delhi is the India I feared, although I know there are far worse slums in the world. 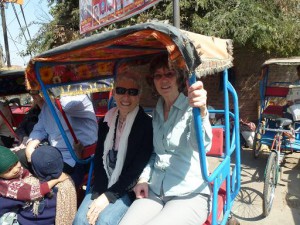 It is the India described in “Midnight’s Children” when the affluent and sheltered Amina Sinai is lured at night to a fortune teller at the Red Fort where she loses her “city eyes.” 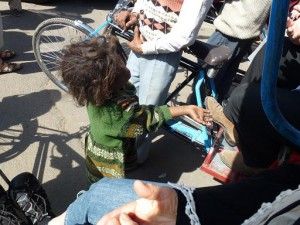 “Under the pressure of these streets which are growing narrower by the minute, more crowded by the inch, she has lost her ‘city eyes’. When you have city eyes you cannot see the invisible people, the men with elephantiasis of the balls and the beggars in boxcards don’t impinge on you, and the concrete sections of future drainpipes don’t look like dormitories. My mother lost her city eyes and the newness of what she was seeing made her flush, newness like a hailstorm pricking her cheeks. Look, my God, those beautiful children have black teeth! Would you believe …girl children baring their nipples! How terrible, truly! And, Allah-tobach, heaven forefend, sweeper women with–no!–how dreadful!–collapsed spines, and bunches of twigs, and no caste marks; untouchables, sweet Allah!…and cripples everywhere, mutilated by loving parents to ensure them of a lifelong income from begging…yes, beggars in boxcars, grown men with babies’ legs, in crates on wheels, made out of discarded roller-skates and old mango boxes; my mother cries out, ‘Lifafa Das, turn back!'” 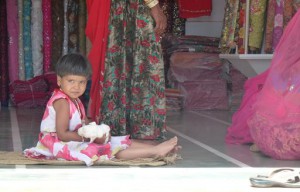 Two surprises here: that Indians themselves can be as shocked and horrified by suffering as visiting Westerners and that I did not have these feelings myself. I ask myself why. there  certainly was a crush of humanity carrying out their lives in circumstances I’ve not seen before. But what the main impression from our bicycle rickshaw ride among the cows and goats and Vespas and trucks and people carrying great loads on their heads or backs is the grace and brilliantly coloured clothing of these very poor women and girls and the bright beautiful smiles of everyone. this was not the horror house I expected.

Am I a blind Pollyanna? Am I unable to shed my own city eyes? Or have, perhaps things become a bit better? And am I also able to see that, contentment co-exists with hardship in the slums of India? In fact, a recent Ipsos Global survey of 24 countries finds that Indians are among the happiest people in the world. (The US and Canada fall in the middle of the happiness scale, while Hungary, South Korea, Russia, Spain and Italy have the greatest share of unhappy people.)