Our Picks for Shakespeare On Screen 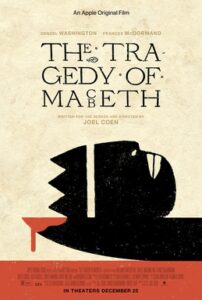 For me, the holiday season is synonymous with movies. During these last couple weeks of the year when work slows a bit, I love to get together with friends (or spend a few hours in my own company) to head out to the theatre or make spicy chili popcorn for a movie night at home. One of the films I and others at Classical Pursuits are most looking forward to this year is The Tragedy of Macbeth, directed by Joel Coen and starring Denzel Washington and Frances McDormand. Definitely one to catch on the big screen.

Perhaps you too have a bit of time off, or are just looking for something new to watch on long winter nights. We’ve got some ideas for you! Three of our leaders, Gary Schoepfel, Rosemary Gould and Sean Forester, shared their own Shakespeare film recommendations with me. Gary is leading our upcoming seminar The Remorseless Working of Things, which focuses on four of Shakespeare’s greatest tragedies.

A quick logistical note: Distribution formats are constantly changing and rights differ between Canada and the US. We’ve tried to include only recommendations that are available on DVD in North America and/or at least one streaming platform. To check where movies are streaming, you can visit Just Watch Canada or JustWatch US, or do an online search. 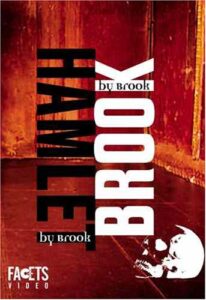 Sean appreciates Grigori Kozintsev’s Hamlet (1964) for its brilliant cinematography and music by Shostakovich. For example, see the ghost scene at 0:20:16 on the YouTube stream.

Sean also thinks it’s interesting to compare David Tennant (2009) and Kenneth Branagh (1996) as Hamlet. In his opinion, Tennant shows more of Hamlet’s inwardness and pain while Branagh focuses on his struggle—compare the “to be or not to be” soliloquies of Tennant and Branagh. 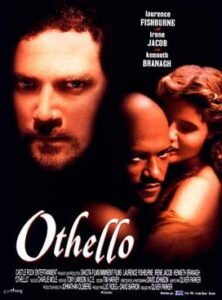 Gary likes the 1995 production of Othello starring Laurence Fishburne and Kenneth Branagh, with compelling performances all around.

I especially appreciate two adaptations of Othello. The first is O, set in a US high school and starring two contemporaries of mine, Mekhi Phifer and Julia Stiles, whose work I always enjoy.

And the second is Omkara, a crime drama set in northern India directed by Vishal Bhardwaj. It’s part of a trilogy of of Shakespeare adaptions by Bhardwaj.

The new Joel Coen film is just one of many screen adaptations of Macbeth. Gary is especially fond of the 2010 film starring Patrick Stewart and Kate Fleetwood, in a setting that evokes 1960s Romania under dictator Nicolae Ceaușescu.

Diehard fans of Macbeth may want to look for the 1961 CBC version starring Sean Connery in his first North American role. The production quality is uneven at best, but Connery gives an energetic and memorable performance.

I was introduced to Akira Kurosawa’s 1985 Ran by Classical Pursuits leader David Schmitt. “Ran” means “chaos” in Japanese, and the wide-angle scenes capture this chaos unforgettably. A marvellous film not to be missed.

I truly amped up my movie going when I lived in New Delhi, where theatres were plentiful and tickets inexpensive, and became a fan of superstar Amitabh Bachchan. One film that sticks in my mind from this time is The Last Lear, by acclaimed Bengali director Rituparno Ghosh. 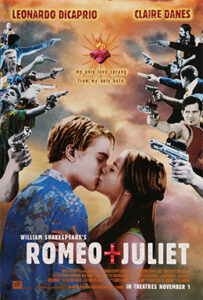 I was in high school when Baz Lurhmann’s 1996 Romeo + Juliet came out, so how could I not love it? I recently rewatched the film as part of an online program with my alma mater, Fordham University. It holds up!

The set details and the soundtrack, featuring Radiohead, Garbage, Des’ree and The Cardigans are also great.

These are just a few of the many, many productions and adaptions out there. For all you cinephiles out there, Wikiipedia has a comprehensive list of films based on works by Shakespeare.

What are your favourite Shakespearean moments on screen? Let us know in the comments.