What forces have shaped Morocco? This mountainous land at the meeting point of the Atlantic and the Mediterranean is a place of both boundaries and confluences — some organically arising, some created or imposed. For more than a millennium peoples from sub-Saharan Africa, the Middle East and Europe have travelled or migrated to Morocco, long home to indigenous Imazighen or Berbers. How rigid or fluid are the spaces —physical, cultural, political, and moral — that join or separate them? What is the relationship between self and society?

On our journey through Morocco’s unforgettable cities and landscape, we’ll look at these questions through the lens of 20th- and 21st-century literature, focusing on the era of the French protectorate and the Tangier International Zone. We’ll read a mix of literature written in English and in translation from the Arabic or French, including Paul Bowles’ Let It Come Down, Driss Chraïbi’s explosive novel The Simple Past and contemporary stories and poetry by Moroccan writers. 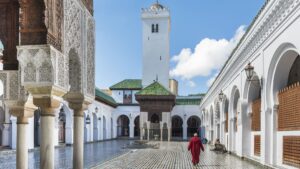 We’ll start in the port of Tangier, on the Strait of Gibraltar. Tangier was known in the mid-20th century for being an International Zone administered by a committee foreign powers, including Britain, France and Spain. This special status drew writers, artists, political activists and spies to the city in a heady mix. We then make our way down the Atlantic coast to picturesque Chefchaouen, meaning “blue pearl.” The city was founded in the late 15th century by Muslim and Jewish refugees forced out of Europe by the Spanish Inquisition. Today, it’s a peaceful place to spend a couple of days relaxing.

Our next destination is Fes. For centuries a centre of learning and scholarship, Fes is a must-visit for a Classical Pursuits trip. We’re especially excited to go to the medieval library established in 859 by Fatima al-Fihri and recently restored by Toronto architect Aziza Chaouni. We end in busy Marrakesh, the old imperial capital and home to beautiful examples of Islamic architecture and tilework. We’ll also take advantage of Marrakesh’s proximity to the Atlas Mountains to visit the artist village Al Maqam, set among fruit orchards.

Immerse yourself in the vast scope of Morocco’s history, politics, literature, art and food, Classical Pursuits–style. Please contact us at info@classicalpursuits.com for a detailed itinerary.

LEADER
Melanie Blake is the director of Classical Pursuits. She studied literature and linguistics at the undergraduate and graduate level. Her experiences living and working in Europe, Asia and North America as a university lecturer, editor and tour guide reflect her longtime interest in cross-cultural spaces.