Why Middlemarch Can Change Your Life 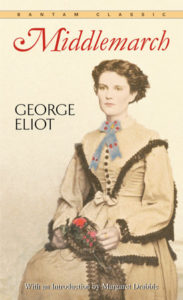 [Editor’s note: Longtime Toronto Pursuits leader Nancy Carr returns in 2019 with a seminar on the unforgettable Middlemarch. The seminar is already half full; register today!]

And I’m far from alone in feeling this way about Eliot’s greatest novel. Readers from the 1870s to today have found inspiration, wisdom, and deep enjoyment in its pages. In 1919, Virginia Woolf wrote in The Times Literary Supplement that Eliot’s masterpiece was “one of the few English novels written for grown-up people.” In 1946, critic and novelist V.S. Pritchett declared that “no Victorian novel approaches Middlemarch in its width of reference, its intellectual power, or the imperturbable spaciousness of its narrative.”  In 2014, Rebecca Mead published a memoir, My Life in Middlemarch, about how repeated readings of the novel have shaped her life. Middlemarch is one of the books people past and present are inclined to rave about (speaking as a raver myself).

So why does this novel elicit such passionate devotion? Why, when I recently discovered during a recent household decluttering effort that I had four copies of Middlemarch, could I bring myself to part with only one? (That one went to a work colleague I’ve been proselytizing for a while.)

Because Middlemarch is the greatest fiction exploration of how to live a life of integrity and significance in a world that often seems overwhelming and meaningless. As Mead put it in a 2011 New Yorker article, Middlemarch is “a book about how to be a grownup person—about how to bear one’s share of sorrow, failure, and loss, as well as to enjoy moments of hard-won happiness.” More than any other author I’ve read, Eliot gets at the roots of why life is simultaneously challenging and full of possibilities for growth. Following the complex stories of characters like Dorothea Brooke, Edward Casaubon, Tertius Lydgate, and Mary Garth can actually change your life. 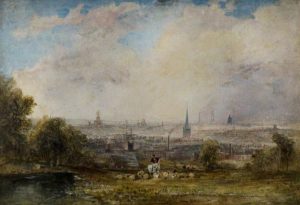 Eliot creates characters who not only do and say revelatory things, but also believably think and feel them. With Proust, Woolf, and Tolstoy, she’s able to take us inside characters to see the springs of their words and actions. Some of the novel’s most important moments happen when external action pauses, and characters think and feel. And it’s the unnamed, third-person narrator of Middlemarch that is Eliot’s greatest creation. Combining empathy for the characters with insight into the larger movements of history and science, the narrator gives us both close-up and big-picture views of life in this small town. The narrator investigates how people respond to each other, how they construct their internal selves, and what impact they have on those around them. Through the narrator, Eliot consistently honours both her characters’ individuality and their enmeshment in a larger community. It’s important that Eliot named Middlemarch after the fictional Midlands town in which her characters live. This novel isn’t just another story: as Eliot subtitled it, it’s a “study of provincial life.”

If I haven’t convinced you yet, consider also that not reading Middlemarch could send your life down a dubious pathway. You don’t have to just take that from me; I got it from Virginia Woolf. In To The Lighthouse, she has the twenty-something Minta Doyle leave the third volume of Middlemarch on the train. When Minta gets engaged to Paul Rayley, a conventional young man also attending the Ramsey’s house party, Woolf uses Minta’s lost book to cast a doubtful shadow over her future. Minta realizes that “she never knew what happened in the end,” but only those who have read Middlemarch will understand the sly allusion Woolf is making. While Middlemarch is about many things—I could be persuaded that it’s about everything—the defining and difficult work of close relationships, especially marriage, is a central theme. If Minta had finished that third volume, she’d either have had a better shot of making things work with the rather pedestrian Paul, or she wouldn’t have married him at all.

Don’t suffer from Minta’s lack of wise perspective! Please join me in discussing all three volumes of Middlemarch this July.